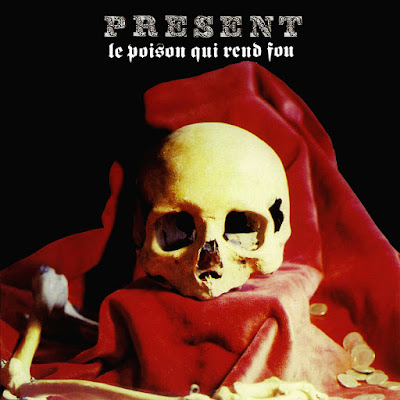 
Present’s second album is a bit more of the same than its debut: dark, sombre, macabre , sinister and one can say gothic in a way. The group comes back with a slightly changed line-up: Ferdinand Philippot is now handling the bass duties, but the change is minor. The artwork is plainly sinister but with a touch of romantic inspiration and fits the music quite well.

Starting of with an epic 15 min+ first part of the title track, featuring an operatic-voiced guest vocalist, Present plunges again on a metronomic groove with the two pianos helping out a great deal and a lenghty trip is undertaken through the insane meanders of Trigaux’s mind. A shorter Ersatz is reminiscent of Belew era-Crimson, and definitely more upbeat and almost joyful compared to the habitual stuff.

The almost 10 min second part of the title track (on the second side of the vinyl), is the logical follow-up to its debut, but is totally instrumental. The closing 9 min Samana (Rochette-penned) is not much different but not quite as dense and might be a little clumsy in its middle section, but it remains in the mould.

Not an easier than the debut album, and just as difficult to recommend, these first two albums are uncanny oeuvres that must be heard by every proghead, but most likely, if they do not like adventurous and partially un-melodic prog, repulsion or rejection will be an understandable reaction. But if you can persevere with Present, soon the full merits of the music will open a new world.