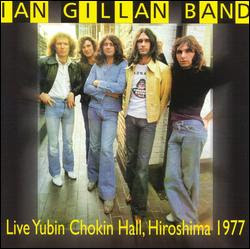 
The gig at the Yubin Chokin Hall, went brilliantly and bought back memories of the visit I made with DEEP PURPLE, which simply did not compare". So wrote IAN GILLAN in his autobiography. It certainly must have made an impression upon him and goes to validate that what we have is indeed a souvenir of a great concert. This is 1977 and although PUNK is happening in the UK things were different in Japan and IGB touched down in Japan on 9th September 1977 for a 6 date tour spread over a 2 week period. The major point being that it gave them plenty of time to relax and sightsee. In fact the band spent the first few days in Tokyo giving them sufficient time to overcome any jet lag before commencing the first gig at Kosei Nenkin Hall. The band arrived in Hiroshima via the Super Express train on 16th September 1977. The visit to the city that only 32 years earlier had been the focal point of the entire world was indeed a sobering occasion. Includes liner notes by Andrew Bedford. Recording information: Yubin Chokin Hall, Hiroshima, Japan (1977).
Posted by Unknown at 1:04:00 AM