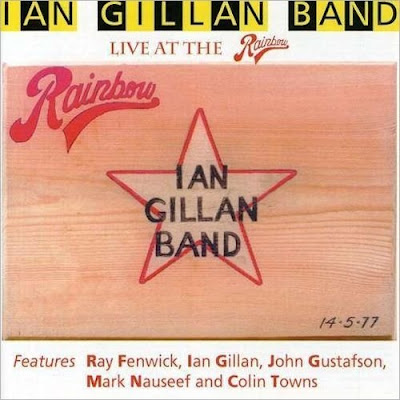 Ian  Gillan Band, with '60s veterans John Gustafson (Merseybeats, Big Three) and Ray Fenwick (post-Stevie Winwood Spencer Davis Group) in the lineup, at a live show on May 14, 1977 at one of Britain's most prestigious rock venues. The sound is pretty good, and the material divided between reprises of old Deep Purple favorites ("Smoke on the Water," "Woman from Tokyo") and surprisingly fusiony originals by the five-piece lineup occupying the stage. ~ Richie Unterberger Touring with the IAN GILLAN BAND in the mid 70's was a wild affair, both on and off stage... It was on 14th May 1977 in front of a packed house at the RAINBOW THEATRE, Finsbury Park, London they performed in front of CHRIS BLACKWELL the label owner who was there that night checking out his investment. The rest as they say in Rock N Roll is history! Recording information: Rainbow Theater, Finsbury Park, London, England (05/14/1977). Photographer: Ray Fenwick. Liner Note Author: Claes Johansen.