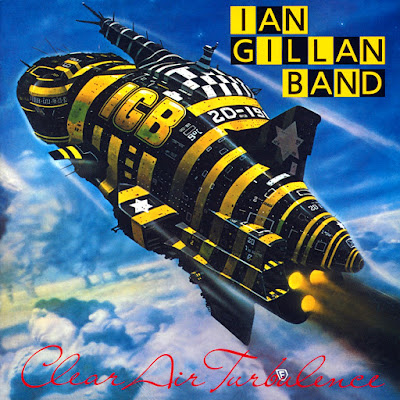 It would not be too much of an exaggeration to call Clear Air Turbulence, the second album released by the sadly short-lived Ian Gillan Band, one of the forgotten masterpieces of Seventies progressive rock. For those who think of Ian Gillan as little more than a hirsute hard rock screamer, listening to this record may definitely bring somewhat of a shock - and not just because of the vocals. Following his return to the world of music after a series of unsuccessful business ventures, Ian surrounded himself with a bunch of seasoned musicians, and proceeded to surprise his fans by slowly but inexorably detaching himself from his Deep Purple past. Unfortunately, though, rock fans are not always as open-minded as we would expect them to be, and the project folded after releasing a total of three studio albums, plus a posthumous live one.
Listening to Clear Air Turbulence we cannot but regret the demise of such an exciting band, with an incredibly high level of musicianship and creativity. The six tracks on the album, which all exceed the five-minute mark, feature complex, multi-layered structures, enhanced by the discreet presence of a horn section, and overall distinguished by a sophistication, a lightness of touch seldom associated with Gillan's mother band. Even Ian's distinctive vocals, while easily recognisable, never really sound like the original 'air raid siren' unleashed on the likes of "Machine Head" and "Made in Japan". However, the ace in the hole on "Clear Air Turbulence" is keyboardist Colin Towns (also responsible for the delicate flutes on the dreamy, soulful ballad "Five Moons"). Another of the many unsung heroes of the rock world, now a composer of jazz and soundtrack music, Towns joined the band for the recording of this album (replacing Mike Moran), and immediately stamped his mark on their music, as well as on the band's later incarnation (simply called Gillan).

Weird, spaced-out keyboard sounds introduce the title-track, rising to a crescendo that soon gives way to a manic, bass-and-drum driven riff, and a wildly exhilarating, 7-minute-plus ride, powered by Towns' sweeping synthesisers. In the middle section of the song, guitarist Ray Fenwick (a veteran of the British rock scene, formerly with the Spencer Davis Group) demonstrates his skills with a slow-burning, emotional solo. Towns is responsible for the delicate flutes on the dreamy, soulful ballad "Five Moons"; while on the funky "Money Lender" horns take pride of place, and Gillan's commanding, even aggressive vocal performance is somewhat reminiscent of his hard rockin' past.

"Over the Hill" (my personal favourite, together with the title-track) showcases drummer Mark Nauseef's impressive skills, as well as brilliant piano and synth work in the bridge, and more understated, tasteful guitar. The atmospheric "Good Hand Liza" follows, punctuated by Latin-style percussion and spacey synths, and driven along by John Gustafson's meaty, dynamic bass lines. The album ends in style with another highly complex, structured number, the romantic "Angel Manchenio", dedicated to a Gypsy who became Gillan's blood brother (a very interesting story indeed, as told by the lyrics). The song, which alternates slower moments, with an almost Latin feel, and full-fledged jazzy flights of instrumental and vocal prowess, is probably the furthest Gillan ever strayed away from his hard rock roots, and a perfect closer for the album.

Even if, at the time of its release, "Clear Air Turbulence" was not considered rock enough by Deep Purple fans, and probably not jazzy enough for lovers of fusion, over thirty years later it is high time it was recognised as the adventurous, stimulating near-masterpiece it is. It is a sad fact of the music world that, all too often, musicians are much more ready to try new avenues than their fans. However, don't make the same mistake - if you love sophisticated, complex jazz-rock/fusion, don't be put off by the name, and get hold of this album.