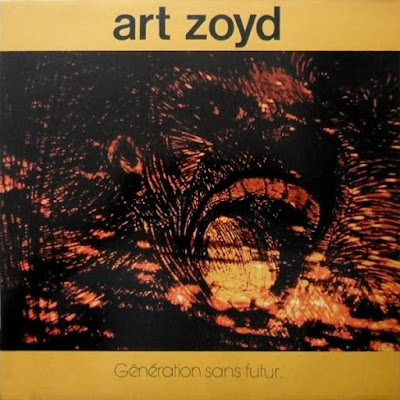 This is the third album from French RIO outfit Art Zoyd, released the same year as the re- recording of the debut album. This is the first album to feature pianist Patricia Dallio, who would come and go on future albums. By the late 2000s she was the longest serving member of the group, with the main duo of violinist Gerard Hourbette and bassist Thierry Zaboitzeff having left. Daniel Denis of Univers Zero is back on percussion from the last album, but getting behind a drumkit for one song. His fellow UZ bandmate, bassoonist Michel Berckmans, did not join him this time. This is the most democratic album yet from the band, with four members getting writing credits.

Although this ensemble first formed in the late 1960s, they only released a few psychedelic singles before recording their first, self-financed album in 1976. The music of Art Zoyd can be similar to the music of Univers Zero, but AZ preceeds them and has no drummer and incorporates vocals. Generally in the 'chamber prog' category, but this album in particular is perhaps the groups most jazzy. With each album AZ became slightly more electric and electronic. There is some electric piano here, which would be the first electric instrument AZ used since electric bass and some very sparse use of electric guitar. The following album will have organ and samples; the next one, drum machines and synths. And so on, with the acoustic instruments gradually taking a back seat.

Again starting an album with the longest song on it, this is the only song on the album to feature vocals. "La Ville" opens with whispers and piano playing bassy low notes, two at a time. Then some viola and trumpet joins in. Later the music stops and then bass, viola and piano with some "sh-sist" vocals that get repeated like a mantra. Trumpet comes in. The vocals and bass stop. You hear some guitar now. Later on the music stops again, then goes into a dramatic section with repetative piano and a repeating voice saying something that sounds like "We're in style!" or "Where is tile?!?" The person sounds like they are either boasting about how "we're in style" or is severely confused and wants to lay some tiles down, asking "where is tile?"

This epic is not over yet. Later a freer, more atonal section. Later still, some electric piano and cello with someone mumbling like a Nazi Ozzy. A great bass sound later on while the music is very dissonant. Music stops yet again, then some lovely viola, cello and trumpet. The three instruments later get more tense and urgent sounding. The music stops briefly again before going into an energenic section with fast electric piano. Viola and trumpet play some wonderful lines over top. Great cello near the end. Reprises the "sh-sist" part without the vocals. Nice false ending. This is one of Art Zoyd's better epics.

"Speedy Gonzalez" is a very jazzy and busy song for this group. You could picture a drummer in this song. The bass playing and jazzy guitar is great. Another false ending. The title track features Daniel Denis playing more jazzy than he ever did with Univers Zero. The song opens with a slowed down piano sound and military drumming. Drumming stops and cello, viola, trumpet and/or sax join in. The main melody here which gets repeated later is fantastic. More military drums and a short trumpet solo before it switches to a guitar and piano dominated section. The music stops and you hear the rumbling slowed down piano chord get repeated again. Then the great main melody gets reprised. Changes to a jazzy section with drumming. Then drums stop briefly then come back with some great guitar and a skronking sax. An overdubbed bass and tom-tom rhythm forces it's way in as the sax is still skronking away. The guitar and piano dominated section gets reprised, now with more emphasis on viola and trumpet. Ends with one last slowed down piano chord.

"Divertissement" is a piece that Zaboitzeff will later re-record for a solo album. Basically this a modern classical composition. Nice mix of cello and viola with some piano added later on. In complete contrast, "Trois Miniatures" is almost pure jazz. Laid-back easy jazz with some viola and no drums. Great jazzy guitar playing. After awhile it gets more dissonant with some viola string plucking. Later gets more chamber prog sounding and what sounds like a clavinet starts playing. Music stops and goes back to the beginning section.

This would be a great place to start with Art Zoyd. I know this album was recently re-released, but it's probably expensive. The title translates to "generation with no future", but the music generally is not too dark or bleak sounding. For fans of Univers Zero and Magma, this comes highly recommended. A great prog album from 1980, when there wasn't a lot of great prog being made.