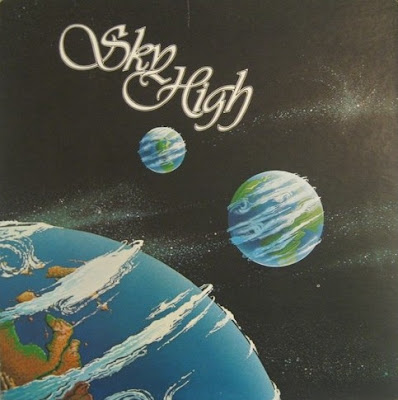 Here's an album that has been getting some buzz lately within the collector community, and the ebay prices have soared because of it. I received info from both The AC and Midwest Mike roughly at the same time, and both unequivocally panned it. Of course, the first two tracks are pure late 70's mirror ball disco numbers, certainly not the sounds one wants to hear when shelling out hundreds of $.

I found the music to be relatively pleasant, not too far removed from the French band Cortex. Though by no means does it exude the exoticism of their first couple of records.

The AC says: "Here we go again... Another one of those "Jekyll and Hyde" LPs that couldn't quite decide whether it wanted to aim for the charts or pursue something musically interesting. The first side is absolute dreck, a nauseous brew of cheese-tacular disco, whiter-than-white funk rock and trite AOR/pop tracks that will have you clawing your ears out. There's one sort of proggy AOR piece towards the end that's okay, but the rest is just unspeakably bad. Then we hit side two, and it's almost like an entirely different album. A frenetic instrumental fusion track leads things off, complete with some scorching lead guitar. Unfortunately, there's one more bit of pain to endure, in the form of a hilariously bad lounge-funk number, but after that they finally turn the corner for good. The remainder consists of a couple tracks of pleasant spacey fusion with female vocals, followed by another excellent instrumental jazz-rock workout. So, we end up with about an even split in the good-to-crap ratio here. The group were from Regina, Saskatchewan (where the albums was also recorded), but the label was based out of Vancouver. To be honest, this album is a very marginal entry for this list, but I think it's worth highlighting due to the fact that it's just recently emerged onto the collector scene and is already garnering some very high prices. Recommended only to obsessive genre completists (like myself)
Posted by Unknown at 4:23:00 AM