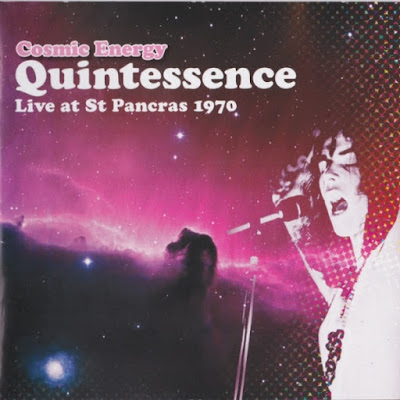 
Quintessence were unique among the early 70s UK bands, incorporating Eastern themes into their brand of progressive influenced psychedelic rock. But though the band gigged hard on the concert and festival scene, precious little live material has been officially available. Until now…

Hux Records has released two sets of CDs, featuring Quintessence performances from 1970 and 1971 that have been resting in the Island Records vaults, the band's label for their first three albums. The late 1960s through early 70s were among the most progressive and creatively fertile in rock history, and the opportunity to hear live shows from the period is always a treat. But because of the rarity of Quintessence concert recordings, and the fact that live performance was the band's true element, makes these releases genuine historical documents.

The St Pancras set opens with the 20 minute "Giants Suite". Starting off in song mode, the band quickly launch into a heavy psych-rock jam, showcasing a considerably rawer rocking feel than can be heard on the studio albums. And when Phil 'Shiva' Jones' vocals eventually rejoin, it's with passion and intensity, and an improvisational vibe that grooves along beautifully with the music. "Twilight Zones", "Sea of Immortality", and "Jesus, Buddha, Moses, Gauranga" round out the 1970 set, all similar in length to the studio album versions, but with the same instrumental excursions that made Quintessence such a thrilling live act.

The bonus tracks on the CD consist of a nearly 40 minute version of "Giants Suite" from the 1971 Queen Elizabeth Hall shows. This is a brilliant addition, as side-by-side with the 1970 version it demonstrates how from one show to the next a song could be given a very different treatment. A year later the music has taken on a mellower, meditative feel. But though the jams are less raw, Quintessence still rocks as hard as they could massage, and at one point breaks off into a percussion and flute driven Latin-jazz inspired groove, that ends up with a hip-shaking, slightly boogie-woogie, psych-rock feel.
Posted by Unknown at 5:41:00 PM