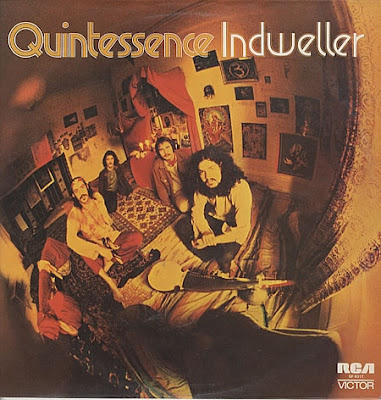 Cautoin: this record - the fifth offering by the band - is absolutely dire. You are recommended to avoid it at all costs. Aside from seven minutes of indescribably beautiful interplay between Raja Ram on flute and Alan on guitar on "It's all the Same", it is utter garbage from start to finish. Destroy on sight.

The group had, by this stage, parted company with both the masterly vocalist and front-man, Shiva (Phil) Jones, and his side-kick on rhythm guitar, Dave Codling - (each of whom was soon to re-surface in the short-lived KALA) - and thereafter succeeded only in carting their pseudo-Eastern mystic baggage down an increasing number of dead ends until they, finally and thankfully, wholly imploded.

But it was all so tragic. The fact is that, whereas the band's five albums between them only contained enough decent music to justify filling one mid-price CD (never mind the two full-priced, chant-riddled offerings they eventually put out), when performing "live", away from the confines of the studio, they were simply electrifying - probably one of the most memorable bands I have ever seen - and could manufacture an absolutely fantastic atmosphere through their magical playing, with Alan's virtuoso lead guitar wailing and floating gloriously above the driving, tight-knit rhythm supplied by Jake, Dave and Shambhu, whilst Raja Ram danced with his flute and Shiva danced with the audience. This was psychedelic rock at its finest. Some scoffed and said it was ridiculous and pretentious. Maybe. But who cares? The band was terrific when I saw them in 1969, even better when I saw them in 1970, and absolutely magnificent when I saw them in 1971. So stuff the critics, as far as I am concerned, the only sense impression that counts is my own, and, in my view, Quintessence were just a truly dynamic "live" outfit who couldn't hope to recapture in the studio the atmosphere they generated on stage and, predictably, fell miserably and depressingly short.....