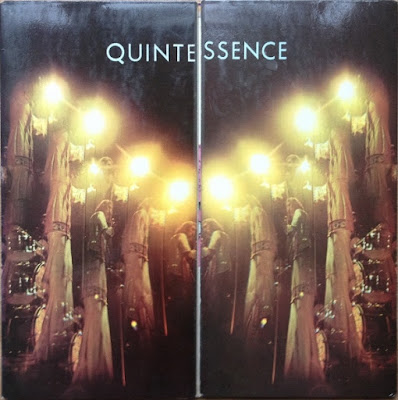 
Second album by Quintessence had been in some way slightly advanced compared to their debut with more elaborate tracks and a less pop-ish sound. On the other hand it appeared as well rather incoherent with spiritual chants standing at times blatantly besides acid jamming and Cream-ish heavy blues rocking. Overall it revealed a kind of nice atmosphere not too far away from the one in early Krautrock albums. Their ecumenical hymn "Jesus, Buddha, Moses, Gauranga" which opens the album reflects very well the spirit of this record they dedicated "to Our Lord Jesus". This one's by far the only commercially sounding one on here belonging together with "Notting Hill Gate" and "Gange Mai" from their debut to the most memorable songs by them. "Sea of immortality" sounds considerably more sophisticated exploding into a jam session and here's the place where the hint to Cream becomes obvious. "High on Mt. Kailash" is an excerpt of a planned rock opera starting with birds singing and reveals droning sitar, some jingling temple bells and Shiva's haunting vocals that remind me at times a lot to Jim Morrison's. That one's quite a mysterious and fascinating track and certainly one of the highlights of this album. After that one there's a sudden skip to the live recorded very loud instrumental "Burning bush" featuring heavy jamming of wah-wah guitar, bass and drums. This track seams to be not very well placed between the previous one and the following spiritual "Shiva's Chant" and as Chris Welch suggests in his liner notes the close array of these contrasting performances presented here by the band might reflect in some way the contrast between the two aspects of their style. But in fact the rather imperfect structure of this album and its appearance as more of a compilation of songs than a coherent work is the only reason for considering it less essential. For the song material here is really substantial as demonstrated by the next two tracks "Prisms" and "Twilight Zones". The former one is all instrumental and consists of an improvised flute solo by Raja Ram with the addition of some great echo effects. This one segues seamlessly into the next track being an excellent ballad-type one dominated by Shiva's vocals and backed with flute and guitar. "Maha Mantra" is another hypnotic chant followed by the slow ballad "Only Love" whereas in "St. Pancras" the band presents us once again their live jam qualities. The short track "Infinitum" finally closes this rather strange album with a quite awkward droning sound. But overall such kind of hypnotic and droning sections which aren't not that much my "cup" usually are kept here quite shorted and I really don't find them disturbing at all. 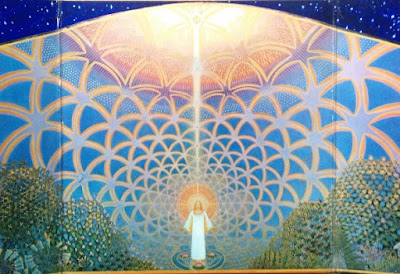 As a summary of my review I've to say though I usually don't favour albums with religious contents this one was quite appealing to me albeit being a more difficult listen than their debut. Nevertheless it's a kind of acquired taste and some people might feel alienated by its religious background. Thus I would not consider it essential in a general Prog context but fans of Krautrock or spiritually influenced "hippie music" might check out this band.
Posted by Unknown at 2:08:00 PM