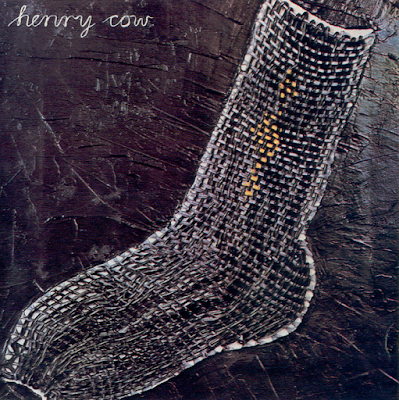 
Henry Cow's second album saw a number of changes from their debut. Saxophonist Geoff Leigh had left, and was replaced by multi instrumentalist Lindsay Cooper.

The album drifts away from the Canterbury roots evident on their debut, showing two distinct sides to Henry Cow. Side 1 (tracks 1 - 3) features pieces composed by individual members, whilst side 2 is largely taken up with group improvisations enhanced with studio effects. If you're looking for comparisons, side 1 has a lot in common with Univers Zero, while side 2 is closer to Faust.

Side 1 kicks off with Fred Frith's Bittern Storm Over Ulm, a short piece that, according to the sleevenotes, "owes a debt to O.Rasputin's 'Got To Hurry' by the Yardbirds". Frith leads from the front with some magnificent guitar squalls and the rhythm section out- Beefheart Beefheart, and the whole thing is over in less than 3 minutes. John Greaves' Half Asleep, Half Awake follows. A beautiful, under stated piano intro leads into the most accessible piece on the album, a reverie which has echoes of post-Third Soft Machine or Zappa circa Hot Rats/Burnt Weeny Sandwich, but which has a sound all of its own. Cooper's oboe is the lead instrument for the main body of the piece, followed by shorter bursts of clarinet and guitar. The final piece on side 1 is one of Henry Cow's most uncompromising composed pieces, Ruins, a piece which could well define the RIO sound and which has rarely been equalled for complexity or depth. 25 years after first hearing it, I still find new nuances every time I play it.

Side 2 opens with a short piece from Henry Cow's music for a production of The Tempest, an oboe/guitar duet, before launching into some dazzling studio improvisations. Linguaphonie features a lot of half and double speed recording, puctuated by the band reciting bits of nonsense in a variety of foreign languages - sample 'il y a pour moi vingt cinq chiens', or 'there are twenty five dogs for me'. Upon Entering The Hotel Adlon is a manically fast paced burst of improv that could blister paint at 50 paces. Arcades/Deluge closes the album, a beautiful and melanholy group improvisation that closes with a brief fragment of song from John Greaves, with semi audible lyrics.

Unrest is a superb achievement by on of the most committed and uncompromising of 1970s rock groups. It may be hard work, but ultimately it is also highly rewarding.