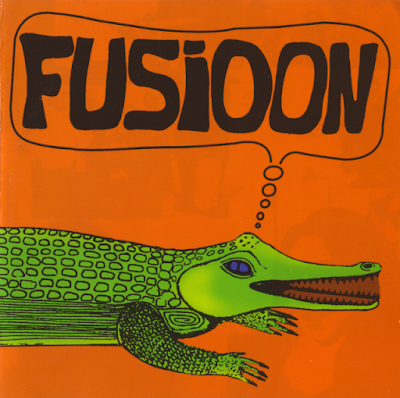 Don't get fooled by the band's name, ironically when the vast majority of 70's catalan prog was jazz-rock/fusion, Fusioon was one of the bands with lesser of it. Well more precisely both their eponymous debut and their last album Minorisa do have some fusion, but this one Fusioon 2 (nicknamed "Crocodile" to differentiate it from the debut) has little if any, instead being a delightful combination of Eclectic, Symphonic and Canterbury.

We can find two main broad styles, the tracks with vocals (sung in spanish) Farsa Del Buen Vivir and Dialogos sound very Gentle Giant, with intriguing harmonies that achieve that delicate balance between orthodox melody-harmony and dissonance. On the other hand the instrumental tracks Contraste and Tritons retain some GG flavour but can also remind of Egg, The Nice or Soft Machine, even King Crimson sometimes.

The 10 min last track Concerto Grosso has a few vocals but is mostly instrumental and combines both broad styles, fusing all the aforementioned influences over a more symphonic, nearly classical song structure as the title suggests.

Instrumentally the focus is on the fantastic keyboards work by Manel Camp, combining classical influences with aggressive soloing, and the drumming of Santi Arisa being also very good, these guys were among the finest musicians of the catalan scene in the 70's. But what I really love is the compositions, they are musically challenging and competent and perfectly reflect that kind of genuine, unadulterated prog inspiration which flourished in the first half of the 70's.

Many consider their third and last album Minorisa their best but although that one is also excellent and probably more technically elaborated, personally I prefer "Crocodile", it is more eclectic and does not have excessively experimental sections as Minorisa does. The best album by one of the best spanish prog bands of the 70's,
Posted by Unknown at 6:23:00 PM