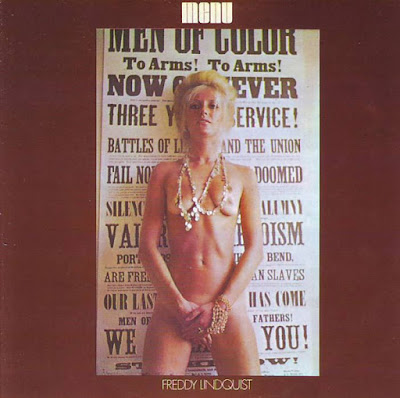 
Back in the 60's, Freddy Lindquist was known as one out of two super leadguitarist in Norway. The Other was Terjie Rypdal. Freddy was hailed as the Hendrix of Norway. Freddy started out his rock path as a member of Gibbons in the early 60's. In 1965 he was offered the job as the new lead guitarist in one of the leading band at the time, The Beatnicks.The band was changing their musical style from a Shadows inspired band to a proper beat-band then. Freddy stayed with them for a couple of singles, until he was headhunted to play lead guitar in an even more popular band, The Vanguards, in 1966. Their former lead guitarist, Terje Rypdal, then went to play the organ, until he quit, diving into psychedelia with The Dream. In addiction to some singles, they both played on both LP's released by The Vanguards. The first best forgotten, but the latter of those, Pnooole, was quite a good popbeat album, both by the standards of that time, and even today. It was released in different sleeves to the Norvegian one, in both Sweden and Italy. After some more singles, Freddy quit the band in 1969, to join his old mates in The Beatnicks/New Beatnicks. One more single followed before Freddy left again, and the rest of the band transformed into Titanic.
Hardrock was then the new formula and Freddy formed the supergroup Jumbo, inspired by the likes of Deep Purple and Led Zeppelin. Two singles were released, again one lousy and one great, the great one being U.F.O. The band then started recording an album, but in the midst of that the band fell apart, and the remaining members fulfilled the album and released in under the name Finjarn/Jensen. An underrated album it is, although not hardrock, but more rock/pop-psych. Some of Freddy's guitar takes was kept and he co-wrote two of the best song on it. A rare album today, and strangely still not released on CD.

Freddy on his side felt that the time was right for a proper soloalbum now, and his Menu was recorded and released in 1970. Freddy played a lot of the instruments in the album, but was joined by among others Freddy Dahl (Junipher Greene, George Keller Band, Ruphus, Saluki) and his mate from Jumbo, Leif Jensen. The album did not sell to well, and soon went into oblivion. Hard to understand why when listening to it today! The album, or some tracks from it, was later released in Mexico. Freddy have since then had his own band, and he have played in numerous bands and recordingsessions, in various musical styles. When collectors in Norway, and then abroad, in the late 1980's rediscovered Menu, the demand for the LP soon was a lot bigger than the supplies, and the prices for a mintish original quickly went skywards. The album was then re-released by Pan on vinyl in 1991, and later bootlegged by some italian gangsters. Now it's finally released on CD for the first time, remastered and sounding fresh as ever. Menu by Freddy Lindquist is for ever established not only as one of the rarest albums from Scandinavia, but also as one of the very best. Thanks to Freddy for sharing his delicious Menu with us all!