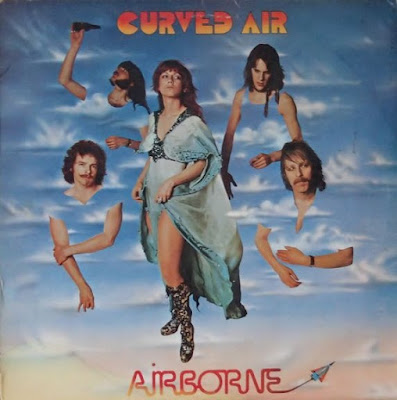 While “Airborne” (released in 1976) represents the declining years in terms of Curved Air’s success and popularity, it does have some historical significance as it was the band’s last official studio album. “Airborne” is also notable as Stewart Copeland, who went on to find superstardom as drummer with the Police, plays “heavy artillery” (i.e. drums) here. He had already appeared on Curved Air’s “Midnight wire” album, which was released just after the reunion of (most of) the original line up for “Curved Air live”. From that re-union, violinist Daryl Way remained in the band, the line up for “Airborne” being completed by guitarist Mick Jacques, and Tony Reeves on bass.
Copeland, who had recently married lead singer Sonja Kristina, participated in the song writing for the first time when he co-wrote the music for the opening track, “Desiree” (which was released as a single) along with Jacques, and the co-wrote lyrics with his new wife.
The three Daryl Way tracks are the eye catchers here, in particular “Moonshine”. This track stands head an shoulders above the other songs on the album, especially in prog terms. While not quite as appealing as previous Curved Air masterpieces such as “Vivaldi” (“Air conditioning”), or “Metamorphosis” (“Air cut”), “Moonshine”, which runs to about 10 minutes, is an impressive piece of work. The pace and mood of the track change regularly throughout, moving from soft delicate passages, to virtuoso violin by Way, and some fine symphonic keyboards. At times, there are echoes of Gentle Giant among others.
The rest of the tracks effectively play a supporting role. Side one consists of five short numbers. “Desiree”, is a pop-rock opener, which features multi-tracked vocals by Sonja Kristina, and some decent, if brief, lead guitar. Quite why the band felt the need to multi-track Kristina’s voice is something of a mystery, but it is a sound which features on several of the tracks here. Copeland’s composition “Kids to blame” is a fairly innocuous piece of pop rock, but he took it with him to The Police, where it featured in their live act.
The closing track on side one, “Touch of Tequila”, is the antithesis of “Moonshine”, being a dreadful pop influenced song, which sees Kristina sounding a bit too like Irish Eurovision star Dana!
There are a couple of decent ballads, “Broken lady”, co-written by Sonja Kristina, and Daryl Way’s lullaby “Dazed”, which closes the album.
“Airborne” is an album of peaks and troughs, ranging from the excellent prog of “Moonshine” to the disastrous pop of “Touch of Tequila”. In all though, a worthwhile effort, which will, in the main, please fans of the band.