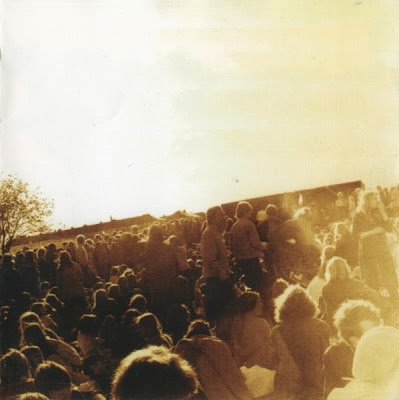 
TRAD GRAS OCH STENAR evolved out of the band INTERNATIONAL HARVESTER, in fact all four members here were in that earlier band. These guys carry on the spirit of INTERNATIONAL HARVESTER who were very innovative, in fact i'd call them trail-blazers. They had a psycedelic style with lots of jamming. This particular album is posthumously released and is a live record from the very first Garten Festival held in June of 1970. This was the first so called alternative or underground music festival of it's kind held in Sweden and TRAD GRAS OCH STENAR were a big part of getting it organized which took over a year. All the bands that performed here were outside of the commercial music industry and they all played for free and helped in every way they could. The government back then was conservative and there were so many road-blocks in getting this approved that they finally decided to do it illegally. They advertised it heavily hoping that if many people showed up the police would let them carry on. Well even in setting things up the police were frequent visitors and many arguments resulted but in the end the concert went ahead in the pouring rain. The owners of the field decided to let the concert go ahead and the police were instructed to keep the hippies on the field and when it was over those involved with the concert were procecuted. TRAD GRAS OCH STENAR had the honour of performing first. This was all recorded by a man who was a friend of the band seated near the front of the stage. He used a tape recorder with a microphone. This was before the band had released any albums so this really is their first recording.
"Frihetsdans I D-Moll" is pretty much the band jamming repetively over and over. "Tegenborgsvalsen" is more of the same only the jam is much shorter. "Lifeforce #3" builds very slowly. Drums to the fore as it ends. "All Along The Watchtower" is a Bob Dylan track made famous by Hendrix. It took me quite a while to even know this was that song. Lazy guitar and vocals help out. "In Kommer Gosta" kicks in with vocals before a minute. Catchy stuff. "Satisfaction" is another cover this time of THE ROLLING STONES hit. It's okay.

Well it's in part because of the sound quality, although it's not bad. Maybe it's because it's live or maybe it's the material but this doesn't come close to being as good as INTERNATIONAL HARVESTER's debut. A good album though and maybe more important because of it's historical significance on Progressive music in Sweden.
Posted by Unknown at 10:07:00 PM