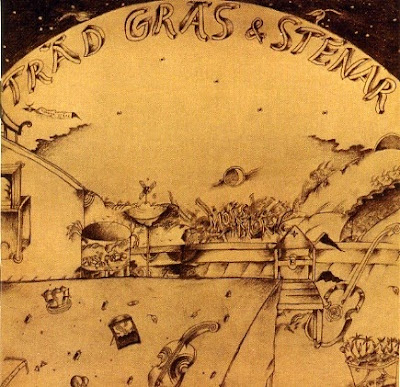 
Live recordings from Sweden & Denmark 1972. This is the twin release to Djungelns lag. Originally released in a very limited edition on their sound engineer Per Odeltorps'(also known as Per Gud or Stig Vig) own label TALL. They were reissued by American label 1/2 Special 2002. Enough now ...
This record is a bit weaker than Djungelns lag. One reason is that Arne Erikson(cello, clavinet) left 1972. Another reason is that it doesn't contains so much long improvisations. There's only one long workout, the CD bonus track - "Sommarlaten"(16:41) - loosely based on that song from their 1968 masterpiece Sov gott Rosmarie(released as International Harvester).
Two other shorter improvs works well - "Klangbron" & "Sångbron".
The rest is more song based or traditional rock, for example a cover of Stones "The Last Time".

This is the Trad Gras record that I return to most.  It's maybe not as endlessly deep as the head-spinning Parson Sound reissue or as drool-enducing as some of the jams on Sov Gott Rose-Marie, but that doesn't mean it's not worthy.  This was one of the last releases from their first period together and it sounds like they're totally at ease, improvising, jamming and having amazing fun...

Chrisboogie is one of their best, the guitars just effortlessly circling each other and lifting the rest of the band ever upwards.  Last Time starts off a pretty straight Rolling Stones cover, before going all glassy-eyed and zoned out, the guitars icing over and locking into repetitive mantras.  They did this on other records with 'All Along the Watchtower', and 'Satisfaction'; when it happens it turns pretty average covers into beautiful and mesmeric trance-outs.

The drumming is also totally perfect, light and energetic and completely breathless throughout the 16 minutes of Sommerlaten.  I absolutely love this record and would recommend it as a great starting point for anyone.