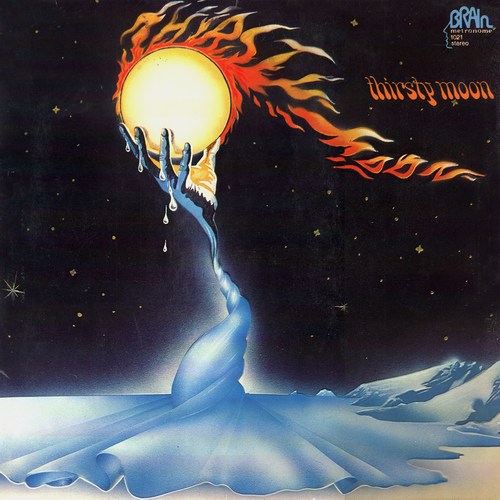 
Much collectible Brain label was somewhat of a specialist in releasing German progressive Jazz-rock in the early 70's. Among which were RELEASE MUSIC ORCHESTRA, CORNUCOPIA, EMERGENCY, and THIRSTY MOON. These guys came from Bremen (south of Hamburg) and their debut was produced by Petersen (ex-IKARUS), giving them a typical instrumental jazz-rock sound of the era.

Debut album from a very typical group that performed a jazz-rock/fusion with that typcal Krautrock spirit, TM's music can be compared to early Doldinger's Passport or Kraan to a spacey Release Music Orchestra (to remain in Germany). Lead by the Drogies brother (guitar and drums respectively), this septet had everything in their handsto make an entertaining JR/F as they introduced some space/cosmische muzieke in it. Released on the verey collectible Metronome section of the Brain label (this would mean the brown label, not the gfreen) with an arresting artwork by artist Gil Funccius, this debut album is one of the better JR/F from their country.

One the opening side, Morning Sun is absolutely delightful and the 9-min+ Big City is a scorcher, both being the essence of TM. The two shorter tracks are also much worthy of the attention. The flipside is made of the sidelong Yellow Sunshine track, which is easily the album's highlight even if there are inevitable lengths and solos.

A very worthy album, just as their second would also be, I recommend starting out with their You'll Never Come Back as it might be a tiny bit more concise, but both are very worthy of every proghead's shelves.