Terje Rypdal
1974
Whenever I Seem to Be Far Away 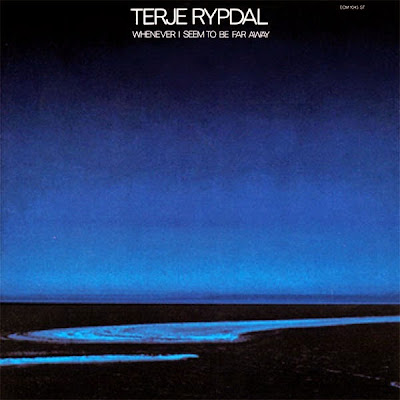 The photo on the album cover was taken after the sun had set and it's almost dark. You can still see dark blue in the water and sky, but it will soon be all black. An apt description of the music inside. Not totally dark like UNIVERSE ZERO for example, but it's pretty close at times. This is different to say the least.

The first two tracks feature a lot of haunting and even creepy mellotron from Pete Knutsen from the Norwegian band POPOL VUH. The French horn only adds to the melancholy, while we at times get some fuzz bass(first track). The lead guitar work by Terje on the first two tracks is fantastic. The self titled side long track has no mellotron on it, but it's the darkest song on the record, this is Chamber music that slowly moves along with the help of strings, clarinet and aboe from a Symphony orchestra. Terje again comes in with his wondrous guitar playing to liven things up somewhat. "Silver Bird Is Heading For The Sun" opens with french horn as waves of haunting mellotron come in. It kicks into gear a minute in as we get some fuzz bass, guitar and drums. Piano joins in as well, the guitar becomes prominant 2 minutes in. More mellotron follows. Fuzz bass 4 minutes in as piano and guitar do their thing. Terje is at his most aggressive after 5 minutes as he rips it up. French horn is back before 7 1/2 minutes as fuzz bass continues. The mellotron after 11 minutes is so creepy. The guitar kicks back in before 12 1/2 minutes as mellotron and fuzz bass continue. It brightens somewhat for the ending when the french horn comes in.

"The Hunt" opens with drums and percussion. French horn follows and mellotron before 1 1/2 minutes. Deep bass and guitar also join in. The mellotron is great ! So is the bass. French horn is back 3 minutes in. The final minute of the song sounds amazing. "Whenever I Seem So Far Away" opens with sombre violin sounds followed by clarinet then violin again. Strings and a dark mood is set before 3 minutes. Clarinet is fairly prominant until we get a change 7 minutes in as the sound gets fuller. Terje starts to take over with his guitar as it cries out in the darkness,especially 14 minutes in. A calm with violin 15 minutes in followed by clarinet 17 minutes in.The guitar ends this one though the way it should.