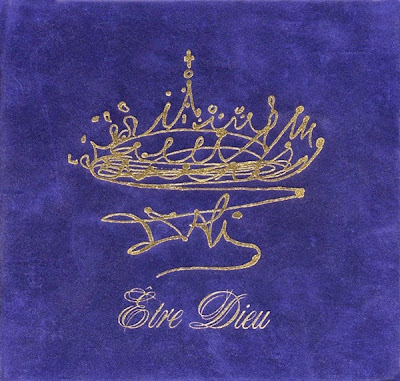 Être Dieu: opéra-poème, audiovisuel et cathare en six parties (French for "Being God: a Cathar Audiovisual Opera-Poem in Six Parts") is a self-proclaimed "opera-poem" written by Spanish surrealist painter Salvador Dalí, based on a libretto by Manuel Vázquez Montalbán with music by French avant-garde musician Igor Wakhévitch. It was originally published in 1985. (Wikipedia).

An opera scored by a pupil of Olivier Messiaen for voices, orchestra and rock group that features the librettist as God, Brigitte Bardot as an artichoke and Marilyn Monroe doing a striptease. Sounds too good to be true? Well, read on....

Salvador Dalí created Être Dieu: opéra-poème, audiovisuel et cathare en six parties (Being God: a Cathar Audiovisual Opera-Poem in Six Parts) from a libretto by the Catalan author Manuel Vázquez Montalbán (1939-2003). The score is by the French composer Igor Wakhévitch (b.1948). His teachers included Pierre Schaeffer and Terry Riley as well as Messiaen and among other influences on his music are Robert Wyatt and the music of Soft Machine. An album of Être Dieu, which is scored for speakers, singers, orchestra and rock band, was recorded on 3 LPs for the now defunct Spanish Dolor Del Estamago label (cover art here) and was subsequently transferred to CD by the German Eurostar label but is long deleted. I can find no information on live performances of the opera although a 2004 article mentions a forthcoming production at Montjuïc, Barcelona which was to be followed by a world tour. There is also a listing for a 2002 Spanish TV documentary about Être Dieu.

The official Dalí biography gives a publication date of 1985 for Être Dieu while other sources confirm the recording date as 1974. At least two sources say the libretto was started by Dalí in 1927 in collabaration with Federico Garcia Lorca. Copies of the CD transfer can be found at premium prices (I know how much I paid for mine, so does my wife... it comes up every now and then). Surely this is a re-issue opportunity? - even if one commentator described the opera as "Pretty much the same as Wakhévitch’s other work, with the added bonus of the Surrealist master declaiming and frequently shrieking over the music". Igor Wakhévitch discovered the ragas of Pandit Pran Nath while studying with Terry Riley and he moved to Auroville in South India in 1980. Auroville is named after the Indian philosopher Sri Aurobindo whose ideas inspired the experimental community.
Dalí's art has many musical subtexts. Wagner's Tristan und Isolde, Bizet's The Pearl Fishers and the medieval liturgical drama Misteri d'Elx regale visitors to the Dalí Theatre-Museum in Figueres, Spain. This high class muzak was chosen by Dalí himself and the sub-texts are interesting. His paranoiac ballet Mad Tristan to Wagner's music was created for the 1939 New York World Fair, but the relevance of the distinctly non-surrealist Pearl Fishers is unclear, although Dalí was known to be a fan of Carmen. The link to the Misteri d'Elx comes from a performance that the artist attended in 1973. The sacred music drama, which dates from 1625, is performed in the southern Spanish city of Elche in August each year and is a UNESCO masterpiece of the oral and intangible heritage of humanity. A recording of the music by the Ensemble Gilles Binchois is available as is Jordi Savall's 'homage' which breaks from performance tradition by introducing female voices. 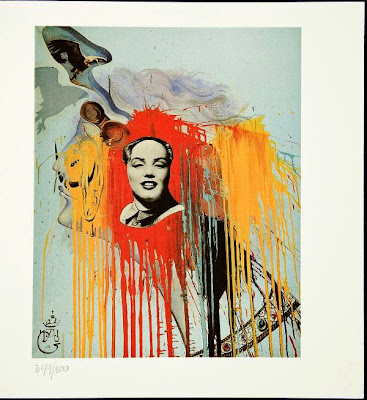 Dali began to write the libretto for this “opera” in 1927 together with Federico Garcia Lorca one afternoon in the Café Regina Victoria, Madrid.  They were likely dining on psychedelic Psilocybin mushrooms.  In 1974 Dali made a record of the opera in Paris for which Igor
Wakhevitch wrote the music and the Spanish writer Manuel Vazquez Montalban made the libretto. There is a prog-rock part played by a band featuring J.P. Castelain, J.J. Flety, Didier Batard, François Auger,J. L. Bentolila and M. Ripoche. 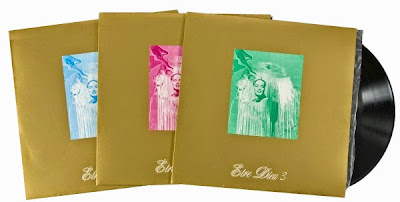 Igor Wakhevitch (born in Gassin-Saint Tropez, France), son of the art director Georges Wakhevitch is an avant-garde French composer who released a series of studio albums in the 1970s and composed the music of the only opera imagined by the legendary genius painter Salvador Dalí: Être Dieu' ("To Be God"). Igor Wakhevitch was a contemporary of similar avant-garde electronic composers, such as Pierre Henry, who was born and based in Paris. Igor Wakhevitch himself a brilliant classical pianist was one of the first composer of his generation to introduce in his compositions various kind of electronic keyboards, moog synthesizer, synthi aks, arp synthesizer, "ondes martenot", electronic organ, etc. : some of his albums, as "Logos" or "Hathor" "Let's Start" are amongst the most impressive albums of experimental music released in France in the 70's. By many all over the world he is considered as a genius. But certainly a very creative soul in a perpetual search of sounds of power and for a new kind of sacred music, cosmic oriented, Igor finding his inspiration from the mother nature and cosmic forces, telluric energies, occult sounds and sacred scriptures as well.

From the age of eight, Igor Wakhevitch learned to play piano under the tutelage of Marguerite Long the legendary French classical pianist and [Lucette Descaves].[1] Between the ages of 12 and 17, he studied at the Paris National Superior Conservatory of Music and Dance Conservatoire de Paris. During this time, he was auditioned by the symphonic orchestra conductor, the Herbert von Karajan at the Théâtre des Champs-Élysées and in 1965 he was 17 only when he won the jury's first prize for piano by a unanimous vote. In 1967, studying at the Paris National Superior Conservatory of Music and Dance under the direction of the great French composer of the 20th century Olivier Messiaen, Wakhevitch won the first prize in musical analysis. In 1968, he worked for the GRM in the Office de Radiodiffusion-Télévision Française under the direction of Pierre Schaeffer.

Wakhevitch was a part of the 1970s atmosphere of musical integration and boundary crossing. He was a friend of the legendary British rock psychedelic band Pink Floyd and also a very close friend of the French choreographer Maurice Béjart who encouraged him to compose for contemporary dance, while his second album, Doctor Faust was dedicated to his friends Robert Wyatt and Mike Ratledge, the two leaders of the British psychedelic rock band The Soft Machine. At the middle of the 1970s, Wakhevitch became a friend and studied with the minimalist American composer Terry Riley, producing Riley's soundtrack album Les Yeux Fermés for Warner Brothers. Through Riley, Wakhevitch discovered the ragas of Pandit Pran Nath.[2] During almost ten years, Igor Wakhevitch has been the composer of many dance-theatre creations of the great American dancer-choreographer Carolyn Carlson at the National Opera of Paris and in many other theaters and festivals worldwide; ref. Igor Wakhevitch's biography on IGOR WAKHEVITCH OFFICIAL WEBSITE. www.wakhevitch.com

In 1974, Salvador Dalí asked Igor Wakhevitch to compose the music of his 'opera-poem in six parts' entitled "To Be God". The album was recorded in the Studios of EMI in Boulogne, performed by various actors, speakers and singers, a string orchestra, choir, soprano soloist Eve Brenner, and a rock band which featured the actors Raymond Gérôme, Delphine Seyrig, Catherine Allegret, Alain Cuny and Didier Haudepin;[3] and musicians Michel Ripoche on violin, Didier Batard on bass and François Auger on drums.[4] Igor Wakhevitch visited India for the first time in 1973 and later moved to Auroville in South India in 1977. In 1991 he had a 30 minutes private audience in Dharmsala India with the 14th Dalai-Lama Tenzin Gyatso, an unforgettable moment in the private apartment of the Tibetan spiritual leader Dalai Lama, producing and organizing the first visit in Europe of the "Tibetan Institute of Performing Arts" (TIPA), a tour in France and Spain and two months performance in Paris at the famous Theatre du Rond-Point (ex Theatre Renaud-Barrault)

Igor Wakhevitch composed also for many dance and theatre creations in India, mostly in Mumbai (National Center of Performing Arts, Tata Theatre, Gœthe Institute-Max Mueller Bhavan and in Auroville on the stage of the Sri Aurobindo Auditorium ("The Golden Light", choreography by Paolo Pereira, "Amravati", choreography by Peter Morin from the National Opera of Paris, "Harichandra", written and directed by his close friend the young actor-director-writer K. Parthasarathy, etc.; ... and many other pieces of music purposely composed to celebrate the Auroville's Birthday at dawn (28 February), bonfire and live performances or recorded music at the Auroville's outdoor Amphitheater, and many other profound moments of his music for community gathering and mediation in various settlements of the city.