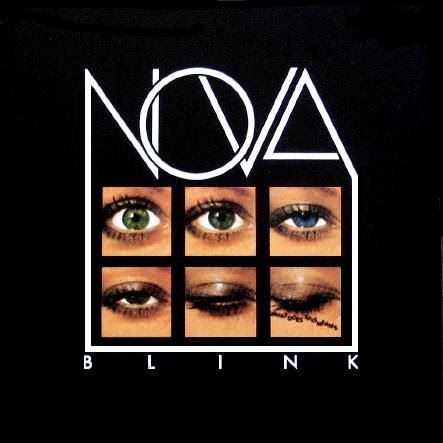 Initially named UNO, the band was created in London in the mid-70's by ex-members of CERVELLO and OSANNA, namely guitarist Corrado Rustici, guitarist Danilo Rustici and sax & flute player Elio D'Anna. The roster of permanent and guest musicians spread over their four albums is impressive: Morris Pert, Phil Collins, Ric Parnell (IBIS, ATOMIC ROOSTER), Narrada Michael Walden (SANTANA) and Franco Lo Previte (CIRCUS 2000, DUELLO MADRE) f{ and that only covers the drums & percussion department. Other contributors include keyboard player Renato Rosset (NEW TROLLS ATOMIC SYSTEM), classical conga virtuoso Zakir Hussain and three bassists: Percy Jones, Barry Johnson (Lenny White's band TWENNYNINE) and Luciano Milanese. As you will have guessed by now, their sound a lot like BRAND X (note that NOVA are not totally instrumental but their vocals are kept to a minimum).

They released four albums between 1976 and 1978. Blink¨, being the first, is not as polished as the others but still offers lengthy jams with sumptuous guitar/sax dialogues. The more mature "Vimana", a Robert Lumley production, focuses on compositions rather than technical wizardry and is considered their best; among other goodies, it showcases bassist Percy Jones¡¦ pleasantly fluid fretless style as well as guitarist Danilo Rustici who truly shines throughout (echoes of John McLaughlin, Al DiMeola, John Goodsall and Larry Coryell come to the mind). With "Wings of Love", the band seemed to take a new direction, what with the shorter track format and in particular bassist Barry Johnson¡¦s funky style, so different from Percy Jones¡¦. Their final release, "Sun City", features still shorter tracks and an even funkier edge, the overall feel approaching mainstream jazz rock. No matter which one you pick, however, all albums are packed with tension, rhythmic energy and technical brilliance. A treat for all fusion enthusiasts.

First album by an Osana-Cervello offshoot and a much more worthy affair than the horrible Uno experience, even if only the two Osana members will stay beyond this first album. And unlike what you'd expect, Nova developed a wild jazz-rock in this opus. Formed in London, under Pete Townsend (Who?) and recorded in his private studios (Eel Pie), Nova presented as a quintet (standard prog quartet plus Elio D'Ana on sax and flute) and gave us plenty of excellent mid-70's fusion in their debut, sung in English (quite well) with lyrics provided by an outside Sedgwick. With an average artwork evoking a slow motion blink (with a changing iris color in the third photo), the album is probably what comes best from Italy in this JR/F style, along with Perigeo and some Area.

Six tracks all divided into two parts all giving high-energy and enthralling jazz-rock, they can be associated with the future Brand X (many members will guest in the following three albums), but also with the second stable Nucleus era (the Sutton years) and even a bit of the first Colosseum (partly due to the vocals). Obviously well coached by the production team, the four sung tracks are in very good English (all things considered), but really, this is a minor aspect as all five musos are dishing out impressive 200 MPH fusion with impressive technical abilities. But I would not actually make you believe they reach Mahavishnu or RTF's technical and virtuosic level, but they match at least the first in feeling.
Posted by Unknown at 7:27:00 PM