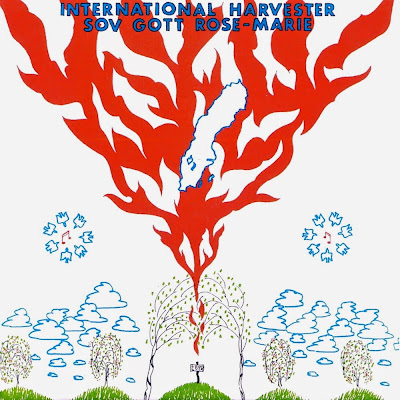 This band is the second incarnation of the Swedish late 60's psychedelic musical collective, which started as PÄRSON SOUND, and which eventually evolved as TRÄD, GRÄS OCH STENAR, inspired by the
American minimalist composer TERRY RILEY among spontaneous underground rock movement aesthetics. The name change was innovated by Bo Ander PERSSON, and it was taken from a name of American company producing agricultural machines. In year 1968 they released the album "Sov Gott Rose-Marie", which was published by the Finnish record label Love Records. This album combined psychedelic rock, folk elements, jazzy improvisations, political statements and natural soundscapes, creating a record fitting logically to the maturing of the group's musical vision. Before the band evolved as to TRÄD, GRÄS OCH STENAR they yet released album "Hemat" with a shortened band name HARVESTER. The spontaneous music of this group was really ahead of their time, and anybody interested of early chaotic krautrock should check out their records, which have now been re-released as vinyls and CD's featuring interesting long jams as bonus tracks.

The inspiration for this Swedish band was ignited when American Terry Riley visited Sweden in the spring of 1967. He performed his minimalistic classic "In C" which inspired a lot of student musicians including Bo Anders Persson.The year before Terry's visit Bo had started studies at the Royal Academy but he didn't feel like he fit in with stiff academic atmosphere.The openess and experimental outlet he was looking for he heard when Terry Riley performed his concert. Bo wasn't the only one who was touched, as it brought together musicians of like-mind which would eventually turn into INTERNATIONAL HARVESTER. I should mention that this band was very left wing in their political beliefs, usually playing at communist rallys etc. The goal of the band was to create something free which often would involve improvs. Bo wanted to create a more contemporary kind of rhythmic music that could play the same role as the traditional Folk music, a music that was both sensual and transcendent. Of course Terry Riley's hypnotic around and around repetitiveness was very inspiring to Bo. He just wanted it to be more organic. The results to my ears are close to Krautrock, in fact that Krautrock spirit is very much the dominating force for me. Bands like CAN and AMON DUUL came to mind. Remember though that this was 1968, so to call this six piece band trail blazers would be to state the truth.
"Dies Irae" has these loud horns and other stressful sounds as the birds sing in the background. A seemingly strange combination.The horns slowly fade away until all you hear are the birds which continues into the next 47 second track.This is kind of cool of course when you realize that this is a Latin death hymn, so the loud heavy sounds represent dying and the pastoral and peaceful sound of the birds is death. "There Is No Other Place" kicks in right away and i'm really reminded of HAWKWIND surprisingly.Vocals join in as they jam heavily. "The Runcorn Report On Western Progress" opens with the sounds of cars driving by and then a mellow soundscape takes over with drugged out vocals. "Statsministern" is 20 seconds of a beat with vocals. "Ho Chi Minh" opens with drums and the vocals chant words over and over from before a minute to the end. "It's Only Love" has these lazy vocals and sound. "Klockan Ar Mycket Nu" has chanted vocals and a beat.The vocals echo later on. "Ut Till Vanster" has horns a beat and what sounds like wind chimes.

"Sommartatan" is an amazing tune with that beat, guitar and vocals. Love it ! "Sov Gott Rose-Marie" is slower paced with mournful vocals. "I Mourn You" is incredible. A beat with flute, guitar and cello as they jam. OUT OF FOCUS comes to mind.Vocals after 4 minutes repeat over and over with passion "I mourn you".This is so good. CAN is a band i'm reminded of here as well. Horns too help out. "How To Survive" has a relaxed beat with flute.You can hear dogs barking as this improv was actually recorded live in a park in Stockholm in the summer of 1968.

Revolutionary might be an over the top word for this album but like PINK FLOYD these guys were creating their own path and implimenting their own ideas.The led not followed. It might not always have worked but then again when you blaze a new trail you often make a wrong turn or two. A very influencial band.
Posted by Unknown at 6:45:00 PM