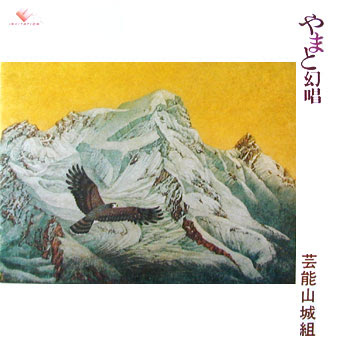 
I'm starting to be more used with Geinoh Yamashiroguni. This choral ensemble seems to demonstrate that the vocal harmonies are similar in each part of the world and this makes this music very approachable if you have the patience to listen to choirs only.
The first track is sad and the oriental flavor seems so relevant mainly because of the lyrics and the tonality of the lead singer. I think that traditional music of a lot of places from Mediterranean Sea to Japan passing by Arabia and India have similar harmonies.
"Warabauta.-Sho" has a strange sound. The Japanese lyrics and the backgroud voice are very Japanese but the chords sung by the two have some of Irish. Try to believe. This is an excellent vocal duo on which the second voice sometimes speaks as in a sort of far-eastern rap adding rhythm to the song.
The first percussion (woods) comes only with the third track, a long one of more than 15 minutes. Male voices coming from "far and below", with a strong reverb effect are introduced by a gong. It seems really to be a hidden religious anthem. An instrument with a sound similar to a didgeridoo leads the first part of a track on which the choral element is less relevant than on the first two tracks and the gong interludes come only when they are effectively needed. the singular thing is that there's less rhythm on this track which has percussions than in the two previous "choir only" tracks. Hypnotic as an early Tangerine Dream album. The second half of the track, after a short pause is mainly vocals and percussion, exactly the opposite of the first half. Here the compulsive rhythm is the basis of all the variations. The choir, too, is rhythmic and a sort of trumpet or a string instrument (I'm not expert in japanese folk) is the variation element. A sort of Japanese Krautrock...
Traditional string instrument and female vocals. This is what "Yanagi No Ame"is made of. Watch a picture of mount Fuji while listening.
The closer starts with a male choir very similar to alpines. This is something that I have already written about other albums. The vocal harmonies are so similar and based of major chords as well as to Christmas carols, but it's interrupted by the string instrument of the previous track (that's supposed to be an intro to this) and by a teathrical speech. At minute 4 the big surprise.....Drums and Bass, then keyboard and electric guitar. If it wasn't for the choir it could be one of the funky-jazz excursions of Klaus Shulze with Stomu Yamash'ta. Very 70s funk totally unexpected and very enjoyable. The choir element acquires almost an African atmosphere so that the first band that comes to my mind as a reference is Osibisa. Just 2:30 minutes, the we are back to Japanese folk. At minute 9:30 another funky-folk section stars. What's the sense of it all? I think you need to know the Japanese to understand it, however it's ver pleasant. At about minute 11 a solo of shakuyaki or how that instrument is called creates an exciting contaminated crescendo as it's backed by bass and drums. A track like this deserve the band's inclusion in the avant subgenre. The alternance of folk and funk continues with different sections until the end when the track has its most avantgarde moments.
Posted by Unknown at 3:40:00 PM