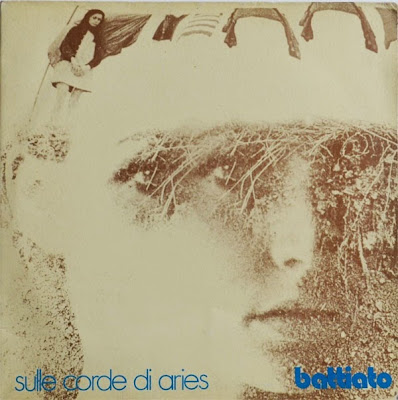 Franco Battiato started his career in the mid sixties as a beat singer. In the early seventies he turned to progressive and released some interesting albums like "Fetus" and "Pollution" then, with "Sulle corde di Aries" (On Aries' strings), he began to turn from progressive to pure avant-garde. None the less this album is absolutely worth listen to since here the experimental passages are well balanced with more melodic parts. The line up features Franco Battiato (lead vocals, synthesizer VCS3, guitar, piano, calimba), Gianni Mocchetti (guitar, mandola, backing vocals) and Gianfranco D'Adda (percussion) plus many guests that contributed to enrich the sound.
The long opener "Sequenze e frequenze" (Sequences and frequencies) blends dark experimental sounds with oriental influences; hypnotic and unusual "filtered" soar after more than two minutes and seem like be floating on a "flying musical carpet" while evoking memories from the childhood... "In summer our teacher taught in her garden / I used to sit on a little wall looking towards the sea / Every now and again a ship passed by...". Then vocals give way to suggestive percussion patterns and to other experimental sounds. Quite interesting, even if for someone this track could seem too long (sixteen minutes!) and in the end a little bit boring?

On the instrumental "Aries" you have more experimental sounds, percussions that seem to imitate a horse-ride and a jazzy sax outro. The atmosphere is ethereal and spacey. Well, Aries is the first sign of the zodiac and in some way it well represents this bold and futuristic track.

Next comes "Aria di rivoluzione" (Air of Revolution) that in my opinion is the best track on this album. Hidden and painful memories seem slowly coming afloat... "In that time in Europe there was another war / There were no songs but alarm hooters...". Here Franco Battiato's lead vocals in "Arabic style" perfectly interact with the voice of Jutta Nienhaus (the singer of the German/Italian band Analogy) who recites some verses in German taken from "Genossen, wer von uns wäre nicht gegen den Krieg", a poem by the German "Liedermacher" Wolf Biermann (in German) on an evocative musical background. Policemen trained against the people get drowned in the crowd storming through the streets like a raging river... My generation wants new ideals / I've already felt the revolution in the air / I've already heard who will be shot down"?

The final track "Da Oriente ad Occidente" (From the East to the West) is like a musical journey from East to West, from Oriental influences to jazzy sounds? "Away from this darkness the future ripens / The sky is without clouds / Father please, let me set off"?