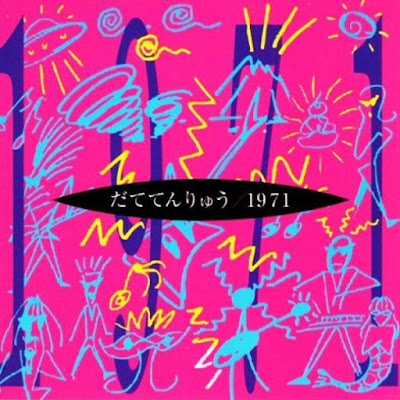 
Included here as representatives of the early ’70s festival scene, Datetenryu was an obscure cousin to Communist agitator bands Zuno Keisatsu (Brain Police), Yellow, Les Rallizes Denud?s and Murahatchibu. Led by organist Masao Tonari, the band on UNTO[album] played a frantic hogwash of soul-based progressive space rock that inhabited the same territory as The the Soft Machine’s debut- LP period (imagine ‘Why Are We Sleeping?’ or ‘Hope For for Happiness’ by way of ‘21st Century Schizoid Man’). Mainly instrumental, their music is a space trek through endless R&B riffs and classic soul moments, like some ever- unfolding medley. UNTO purports to be what the band members would have chosen had they had the opportunity to release an official debut album at the time, ie: a total barrage of lo-fi progressive garage rock. The 20-minute epic ‘Doromamire (Covered All Over In in Mud)’ is the killer, but really it’s all one insane 47-minute-long rush. Formed in May 1971, at Kyoto Sangyo (‘Industrial’) University, Datetenryu was a right bunch of refusenik longhairs. Masao Tonari set up sideways on to the rest of the band, while drummer Shogo Ueda played, head down, facing away from the stage pointing towards Tonari’s Yamaha organ. Indeed, guitarist Kei Yamashita appears to have been permanently out of proceedings in the same way that Yes’s Pete Banks and the Nice’s Davy O’List were forever being sidelined. Datetenryu’s biggest claim to fame, however, was the presence of bassist/singer Hiroshi Narazaki, who later became Hiroshi Nar and joined Les Rallizes Denud?s, thereafter forming his own very excellent band the Niplets, who continue to perform right up to the present time.
Posted by Unknown at 9:35:00 AM