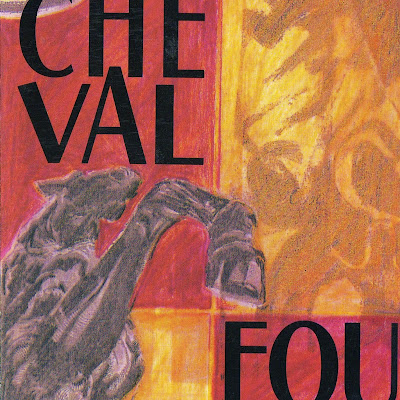 I do not have information on this French group, this CD is a first live edition of recordings (repetitions or concert) between 1971 and 1975. Music planing between Gong and The Cosmic Jokers.

But you won't find any of the restraint or gentility of French Impressionism in the work of the many early seventies freak-rock bands that proliferated as a Parisian parallel to contemporaneous experimentation in Germany. Red Noise, Mahogany Brain, Ame Son, Fille Qui Mousse, Cheval Fou, Crium Delirium, Nyl; these guys were about extremo rock insanity, and they knew how to bring on the noise apocalypse as furiously as any of your Amon Duuls or your Guru Gurus, make no mistake.

To read the music pages of the Village Voice these days, or else Spin, Rolling Stone, The Wire, The New York Times, Alternative Press,Option, Magnet, Raygun, and, well, you get the point -- just about every organ of respectable pop discourse lately, is to come across piece after piece perpetuating the tired old anglo myth that the French can't rock. Gets my ire up, that. That the mainstream of American and British rock criticism finds the idea of European rock ridiculous (unless it's German, of course) -- or else is simply unaware of its existence -- isn't a new phenomenon, but it's surely less defensible than ever in the present age of readily available CD re-issues and copious documentation of the myriad rock and avant-rock scenes that criss-crossed the continent from the late sixties though the early eighties.

The French have always gotten the worst of this haughty neglect, and have had their noses rubbed repeatedly in asinine, reductionist stereotypes, the salient point of which is that the French are traditionally far too dainty, delicate, cool and graceful to really rock properly. Flimsy and demonstrably silly charges such as these are in the air once again due to the love affair now underway between the usual critics/suspects and the French electronic pop duo Air, whose album Moon Safari -- a rather tepid and studiously chintzy set of tunes decorated with Vocoder, Rhodes and Moog, indistinguishable for long stretches from Love Theme From Starsky and Hutch -- has turned on the reviewers by wedding the gooier, pornier aspects of trip-hop with precisely the kind of knowing irony and breezy flair the French are allegedly born to. But for heavens sake, this is a country that produced Genet and Lautreamont, not just Yves Montand and Alain Delon, and the history of its rock music shows it.

So partly for the hell of it, largely to make myself feel better, and lastly but most virtuously to lead the curious novice in the direction of the creme de la creme, I've put together a brief but wide-ranging introduction to a number of the dominant Franco-Rock styles of (mostly) the seventies, since that was the most fertile, febrile time for imagination and innovation in continental rock. Due to the potentially overwhelming nature of such an enterprise, and because I don't intend to write a book here, the descriptions will be rudimentary. For further reading in English on many of these bands, I recommend consulting back issues of Audion magazine (whose publishers are apparently at work on a book on the subject), Expose magazine, and both catalogues put out by my own mail-order company, New Sonic Architecture. Hmm, well, where to begin? Many French bands of the seventies can trace their roots back to a set of overlapping scenes centered on particular bands: Magma, Gong, Heldon, and Art Zoyd are among these seminal ensembles. Another way of starting is to go back to the original progressive rock bands of Great Britain and trace their influence on the dozens, maybe hundreds, of bands that sprouted up in the very early seventies. A few of these British bands had a far greater impact than the others. Soft Machine, for example, was not only among the primary catalysts for the initial explorations of Christian Vander's Magma -- the one French band, besides the Anglo-French Gong, to enjoy widespread recognition of late -- but spawned a number of bands, such as Moving Gelatine Plates and Rhesus O, that took their experimental jazz-rock template for granted and produced remarkable variations upon it. These bands would in turn inform the fresh conceptions of later bands like Carpe Diem, Dun, and Neo.

Other bands, most prominently Ange and Atoll, but with eventual followers such as Mona Lisa, Grime, Synopsis, and Orion, brought their individual perspectives to the dream-like theatrical fantasias of early Genesis, producing dramatic and ambitious suites that may or may not be improved for some by the incomprehensibility of their lyrics. It shouldn't have to be pointed out -- but it does have to be, altogether too frequently -- that this sort of thing, shorthanded as "symphonic rock" by many, was not about elves and fairies, did not require a working knowledge of Dungeons & Dragons to be enjoyed, and was, despite its complexity and occasional conceptual overreach, very much about rock'n'roll. At least listen to Ange's Caricatures before you knee-jerk your negation.

Ah, but I'm getting overheated. Two other British bands that had notable, if fewer, French disciples were Pink Floyd and King Crimson. Three of the most tantalizingly beautiful records of the seventies were produced between 1975 and '77 by Pulsar, whose lush and gloomy grandeur owed just enough to the Floyd of Atom Heart Mother and Wish You Were Here. Slightly similar to Pulsar, but equally reflective of the also vital folk-rock scene of the time, was Pentacle, whose acoustic guitar and Moog reveries rival the Cocteau Twins and My Bloody Vantine for sheer loveliness.

Without King Crimson, it's hard to imagine the birth of such nevertheless singular bands as Shylock and Arachnoid, who between them produced three of the angst-iest, angriest, and most sinister records of the non-Zeuhl (Magma) French rock world. Fripp-derived guitar parts, tortured and caustic or soaring breathtakingly, run riot on these records, but are joined by diverse keyboard sonorities and stunningly syncopated drumming in compositions substantively different from what one would expect from Crimson.

The Canterbury, especially Hatfield and The North, had a pronounced influence on many of the post-Magma bands, but there were few bands in France that directly embraced and embodied the echt-British Canterbury style of whimsical, jazzy progressive rock. Cos were the most impressive exception: their first few albums are of a piece with the best Caravan and Hatfield material. Gong are a bit of a special case due to their multi-nationalism (Allen's really an Aussie after all), but the soberer, oozier side of their patentedly zany space-rock is definitely on display on the Carpe Diem and Dun records mentioned earlier. And that more or less does it for the seminal British influences on French rock.

Some other styles for which British acts are well known were in fact co-developed internationally. The most obvious example is Rock-In-Opposition, a movement with a number of important French practitioners. Etron Fou Leloublan, Albert Marcoeur and Art Zoyd were all at least as fundamental to the creation of R.I.O. as a social force and as a musical style as, say, Henry Cow were. Art Zoyd's first recordings date back to 1969; from there the band moved gradually from frenzied psychedelia to the ultra-menacing, nightmarish chamber-rock of Zoyd's first proper album, 1976's Symphony For the Day When the Cities Will Burn. Marcoeur and Etron Fou traded in less claustrophobic but no less bizarre versions of avant-rock, each reflecting to differing degrees the influence of Frank Zappa and Captain Beefheart. The skewed song-craft of Etron Fou's last few albums eventually inspired a whole school of French bands, including Debile Menthol, Begnagrad, Nimal, and L'Ensemble Raye, some of which remain active.

Peripheral to the French R.I.O. sound and scene were a number of more hermetic, lo-fi, and home-brewed bands -- ZNR, Klimperei, and the solo artist Pascal Comelade especially -- that shared an affinity for small gestures of queer, quirky loveliness, relying on miniature compositions centered on piano, primitive electronics and wind instruments to convey a wistful, humorous charm that the likes of Air can only dream of. The spirit of Les Six composers Poulenc and Milhaud are unmissably present on these artists' records.

But you won't find any of the restraint or gentility of French Impressionism in the work of the many early seventies freak-rock bands that proliferated as a Parisian parallel to contemporaneous experimentation in Germany. Red Noise, Mahogany Brain, Ame Son, Fille Qui Mousse, Cheval Fou, Crium Delirium, Nyl; these guys were about extremo rock insanity, and they knew how to bring on the noise apocalypse as furiously as any of your Amon Duuls or your Guru Gurus, make no mistake.

Marshalling the feral intensity of the freak-rockers, and harnassing it to large-scale compositional structures derived from Stravinsky and Orff, was the self-assigned task of Christian Vander, founder of Magma. Even if you've not heard Magma -- who in their latest incarnation are set to play two shows in the U.S. this year -- you've probably heard of them, and I won't say much about them, except that besides their own formidable oeuvre they bear paternity for a rather immense and internationally influential genre of post-Magma French rock and jazz-fusion known as Zeuhl. Many but not all of these bands featured former Magma members, but each is in some way marked by Magma's essential aural imprint, whether it be in the harmonic chromaticism, the signature bass-sound, or the quasi-Wagnerian bombast of Magma's vocals. At any rate, a short list of the best French Zeuhl bands might go like this: Zao, Shub Niggurath, Paga, Eskaton, Honeyelk, Eider Stellaire, Potemkine, and Weidorje. There are plenty of others, not to mention all the solo albums released by Magma members.

Occasionally overlapping with Magma's membership was that of the last band to be dealt with here, electronic rock pioneers Heldon, whose seven albums (until the recent reunion, which is expected to produce a new one) ascend from throbbingly amorphous guitar-and-synthesizer buzz-drone epics to dazzlingly precise sequencer-driven juggernauts. The constant throughout (maybe I should've mentioned these guys when I was talking Crimson) is Richard Pinhas' heavily Fripp-indebted guitar tone, searing and arctic and taut. Pinhas has also released a series of brilliant solo records, often setting the guitar aside in favor of a purely electronic approach.

Sketchy and superficial as it is, this brief primer sure ain't gonna help the expert, but if even one reflexive Franco disser deigns to open his or her ears and rethink a baseless prejudice, well, I've gone and justified my squallid little life once again, miracle of miracles. Now then, does anybody have anything mean and unjust to say about Italian rock?