Acid Mothers Temple & The Melting Paraiso U.F.O. - 2009 - Lord Of The Underground. Vishnu And The Magic Elixir

Acid Mothers Temple & The Melting Paraiso U.F.O.
2009
Lord Of The Underground. Vishnu And The Magic Elixir 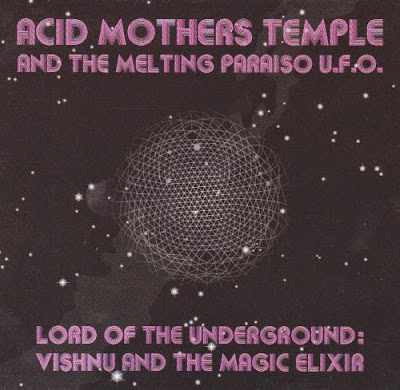 The output of Acid Mothers Temple in 2009 continues to be so staggering it's almost literally impossible to keep tabs on each new release -- including limited live recordings, they issue eight to ten in a given year on an astonishing number of labels. The upside for the band is always having something new to sell at shows, while the downsides for AMT fans are numerous. Another downside is quality control. It may indeed be the mission of AMT to document every single studio moment or every gig and release as many as possible. But given the sprawling nature of AMT in general, this can often lead to some tedious and boring recordings. Lord of the Underground: Vishnu and the Magic Elixir is a mixed bag. It contains three pieces, two longer jams, and one pointless bit of "folk" music tomfoolery in the middle. The set kicks off with "Eleking the Clay," written by bassist Tsuyama Atsushi and guitarist and speed guru Kawabata Makoto. The track begins unexpectedly with some trippy organ before morphing into a bit of Middle Eastern modal folk improvising with droning and moaning vocals before it gets transformed into a first-rate AMT jam. While the original riff doesn't change much, Kawabata handles the boards and transforms it musically and sonically into a wild free-for-all with loads of psychedelic guitar and bouzouki, with the organ getting all Terry Riley-esque and the synth whooping and soaring all over the mix. It begins minimally with bouzouki and guitar improv, all spare and noodling. Singular synth sounds erupt from Higashi Hiroshi, just tripping all cosmic and spacy, but, as with all AMT mega jams -- and this one is 25 minutes -- it begins to change shape and textures as bluesy guitar, vocal sounds, and other weirdness enter the mix. The tune begins to take some form at about four minutes, and transform itself into a slow, bluesy psych jam before picking up speed at about 13 minutes. From here, the electric guitar, and a kazoo strangely enough, begin to assert themselves in slow, purposeful groove. By 15 minutes, the piece has left the ground and distorted basslines, propulsive drums, and the rest of the AMT arsenal all join the party, and mental consciousness expansion multiplies until total psych meltdown.
Posted by Unknown at 3:07:00 PM