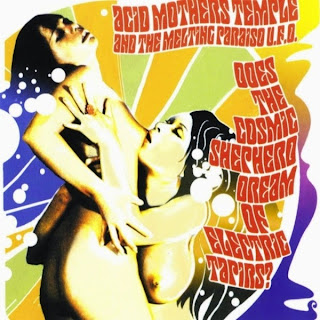 And a very enjoyable impulse buy it turned out to be!  Though I've had a generally positive experience with Acid Mothers Temple & The Melting Paraiso U.F.O. and Makoto Kawabata's Zappaesque shtick, I found Does the Cosmic Shepherd Dream of Electric Tapirs? to be far more cohesive than any other Acid Mothers records I'd heard.  Favorites include "Suzie Sixteen", a melting face take on "In the Still of the Night", and the aforementioned "Transmigration", a seductive drone with lasting appeal.

The songs work together well, but individually they tend to fall short.  Interesting themes rarely resurface, and though "Dark Star Blues" has many excellent moments, it overstays its welcome by a good 8 or 9 minutes.  All told, an enjoyable introduction to The Other Mothers