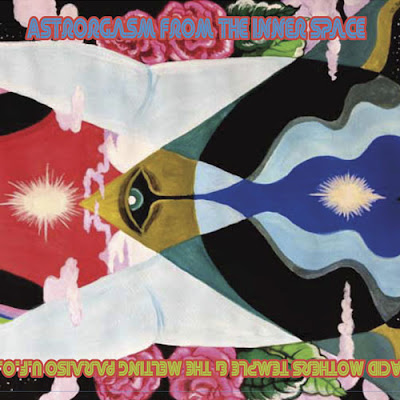 
Acid Mothers Temple’s albums usually seem to come across as polarizing experiences. Sometimes there’s something incredibly wonderful about the psychedelic rock the band pushes out, whilst other times, it all feels a little bit too indulgent and over-bearing. On the bands’ latest album ‘Astrorgasm From The Inner Space’, Acid Mothers Temple once again bombard their listeners with an unrelenting and incredibly explosive psychedelic rock workout. There’s nothing new about ‘Astrorgasm From The Inner Space’, though this appears to be one of the albums that falls into the enjoyable category of Acid Mothers Temple albums.

The new album from the somewhat absurd psychedelic rock band featured four newly recorded compositions, all lasting roughly 20 minutes each in length. There’s a great range of style and ideas being presented by the band on the new record though, ranging from the freak-out sections that dominate many tracks, to very peculiar almost ambient passages, as well as other little instrumental passages of varying styles. It’s an incredibly challenging listen, but for the most part, it feels like Acid Mothers Temple are presenting their listeners with a more cohesive listening experience, or at least as cohesive as Acid Mothers Temple could ever get. There’s actually a lot to enjoy here, with Acid Mothers Temple sounding at arguably their best, with the whole listening experience being full of twists and turns and psychedelic blow-outs that really challenge the listeners.

The bands’ music is always something to be desired of course. The incredibly lengthy tracks are always a lot to chew, resulting in very challenging listening experiences. Whilst there’s actually a fair amount to be enjoyed here, there’s still a lot to really get through. At times, Acid Mothers Temple demonstrate some wonderful instrumental passages, some of which almost border on the accessible, though at other times it all descends into the madness the band is known for. It’s pleasing to some, though there’s an almost tiring element to the whole effect, as we’ve heard it so many times before.

‘Astrorgasm From The Inner Space’ is certainly challenging, but so is any other Acid Mothers Temple album. It’s incredibly bizarre and indulgent music for the mad, and there’s something incredibly enjoyable about that. In terms of other Acid Mothers Temple albums, ‘Astrorgasm From The Inner Space’ seems to come across as a very strong experience, standing alongside ‘Electric Heavyland’ and ‘St. Captain Freakout And The Magic Bamboo Request’. Something about the four tracks being presented at this time by Acid Mothers Temple just seems to work incredibly well, with the whole thing being a wonderful yet maddening album experience.
Posted by Unknown at 7:41:00 PM