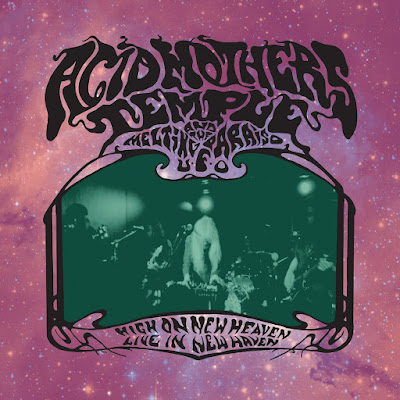 
Acid Mothers Temple & The Melting Paraiso U.F.O. celebrates it’s 20th year as Japan’s premiere psychedelic freak-out collective with the release of this intimate live 4/20 recording. Recorded on site at Cafe Nine in downtown New Haven, CT, Kawabata and crew delivered a solid live show totally deserving of the holiday it was conceived on. Sometimes heavy, sometimes slow and quiet, the set endlessly climbed through the frequencies delivering the fuzzy and hypnotic to a sweaty, gleeful, bleary-eyed room of psychedelic enthusiasts.

This is a fantastic live cd and a must have. It is fairly representative of a their concerts and is a must have. I love it and if I could I would give it a ten star rating. My only complaint is that I wish they would release a full concert album. Hurry and Get it! You will not be disappointed. Play loud and play often. With headphones they are a real trip. Man, these guys have shown me that the sixties have never ended....