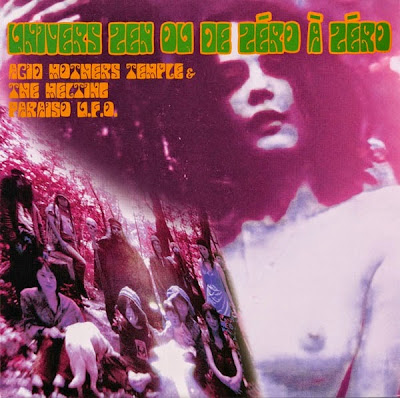 This is one beast of an album. One cannot expect an easy listening experience when popping this thing into the CD player. What one can expect is a otherworldly journey through huge, sprawling soundscapes thick with both distortion and ambience. Tracks rotate on endlessly repetitive riffs and melodies, drawing the listener in and leaving their mind floating somewhere in oblivion.

The great variety on the album can be demonstrated with the opening two tracks, "Electric Love Machine" and "Ange Mecanique de Saturne." The former roars out of the gates with a raucous, noise-laden guitar jam that threatens to destroy speakers and doesn't let up for its entire ten minute running time. The latter is an extremely laid-back, relaxing, acoustic dream which plays like a lullaby from another planet.

Univers Zen is basically an grand symphony from space. Each track is mind-bogglingly immense in scope and the atmosphere that is created here is very dramatic.

Highly recommended for any fans of psychadelic music. It's amazing that the band was able to release 7 full length albums in 2002 and still come up with incredible works such as this.