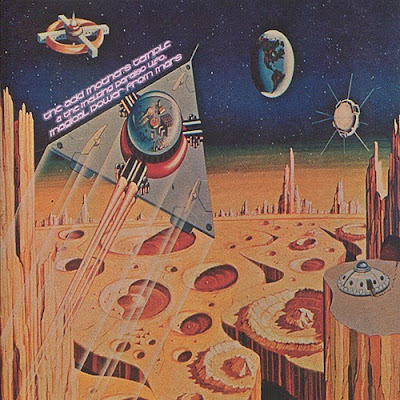 The album consists of four longs songs. The book ends of the album are around 20 minute long songs while the two are 15 minute long. The album is very varied in the AMT context and carry different themes. The songs here take a minimalistic approach that start with one riff and it ends with the same riffs. The interesting part is not the riff, but what they do to it. After some minutes into one song you'll start to feel hypnotized by the repetitiveness of the song. Hearing the same echoed sitar melody being played over and over again in the first song, Ziggy Sitar Dust Raga, until you're put in a trance. The echoed voice in the background with atmospheric effects adds to the overall feeling of the song, witch I think is an intergalactic raga trip to ones mind and beyond.

Other songs in the album are more instrumented than the previous one. Songs like Diamond Doggy Peggy are more representative of their sound witch is very frantic and trippy. The vocals are just another instrument not really saying something, but still adding to their sound. The guitarist, Kawabata, is improvising and soloing in the whole song. The synthesizers are doing some crazy effects and the drummer not really paying attention to the other players. To be honest, no one is paying attention to anything. They are all playing their instruments in their own individual world so the songs can get pretty crazy at times and loud as well. By the end of the song you'll feel like a storm just passed and rather pleased with the "freak out" they just made (considering that you're already familiar with the sound of the genre).

Aladdin Kane is in the middle of Ziggy Sitar Dust Raga and Diamond Doggy Peggy in terms of style. The song starts with Kawabata making fret slides on the guitar that sound like drops of water going up and down all done nicely with the echo effect and then after he starts improvising again through the rest of the song. The synthesizers make some glitter sounding effects that add a nice touch to the song. Below all of that there's very low sound (maybe is the "monster bass" that Tsuyama plays). The song ends abruptly and it kind of took me out of the feeling of the album, but it isn't really a bad thing it's just a little annoying.

The last song, Cosmic Funky Dolly is more relaxed liked the first songs, but now the synthesizers are up front making strange intergalactic effects with some whispers through the whole song and other effects at the background that fit nicely with the "song". It's a nice way to end the album and it still keeps the mood going.

To conclude this is a nice and varied album by the Acid Mothers Temple and nice introduction into the band as well. It has its freak outs as well as its relaxed and chilled parts. It's not an excellent album and it's also not for everyone, but if you're looking to get into the world of Acid Mothers Temple then this is nice and safe entrance.
Posted by Unknown at 4:56:00 PM