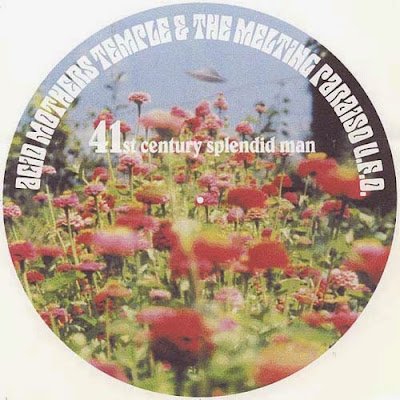 Acid Mothers Temple are a Japanese space-rock outfit who apparently named themselves after Krautrockers Ash Ra Tempel. They are known for their humourous album and song titles which are both parodies and tributes to many prog and classic rock artists. The name of this album is obviously a reference to a famous King Crimson song. Generally what AMT do is called 'freak-out' music. Psych rock guitars are mixed with spacey synthesizers; sometimes other elements are added to the mix as well. This album features Ruins/Koenjihyakkei drummer/leader Tatsuya Yoshida.

This is a very short album with only three songs on it. No lyrics but there are some vocals. The longest song, opener and title track opens with a ringing noise which eventually gets joined by sparse percussion and some synth sounds, amongst other things. This track somewhat reminds me of the early Tangerine Dream/Klaus Schulze stuff. Once in awhile you hear some wordless vocals similar to the 'space whispering' of Gong. I love the tone of the synths at times; they sound like something from a 1980s sci-fi movie. Not a whole lot of guitar in this song. Around the 11 minute mark an industrial type rhythm starts. Some of the synths get atonal and whiny.

"The Creation Of The Human Race" begins very spacey (imagine that!) Around 1 1/2 minutes Tatsuya starts drumming, sounding like Klaus Schulze in Ash Ra Tempel. Some screams turn into wailing. Guitars join in and the band starts freakin' out. I like the mix of the rhythm section and what the guitar is doing starting before 4 minutes. This continues for a minute or two then they go into freak-out mode again. Later on they jam away boogie style before morphing into yet another freak-out. Some space whispers at the end. "Dalai Gama" has some string instruments followed by a cool drum pattern by Tatsuya. Lots of spacey sounds here. More of those 80s sci-fi movie sounds in the middle as the other instruments fade away. This continues as it is joined by some echoed female talking and a cello-like synth sound.
Posted by Unknown at 1:55:00 PM