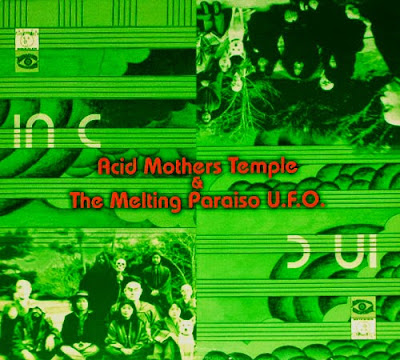 Compared to some of their other works, this album stands somewhat out from the rest. This in the sense that it is different and kind of in between the rest in a unique way. It's still awesome and noisy psychedelic music, but it's less noisy than the Acid Mothers Temple you may know from songs as "Psycho buddha" and "Flying g-spot" and less dynamic than Troubadours from another heavenly world. At least it feels so, due to the flow of the album. You see, this is an album that so absolutely flows. You turn it on and just go with the music.

As much other psychadelic music this album consists of long songs, 3 long ones to be exact, each having their own distinct theme. The first one "In C" can almost be said to be tropical, while the second "In E" is a lot more electric and rough.

Even as monotonious as this album is it never gets boring. This is due to the groove that is present trough out the two first tracks. This groove is the kind of groove that is slow, thick and solid, so no matter what happens on top of it, you still remain somewhat grounded.

The last track "In D" is a very much calm and Zen-themed song which, at this point should just float comfortably by.

If you happen to like Acid Mothers Temple, you will like this. If you simply happen to like psychadelic music, this should be a fresh breeze to your collection.