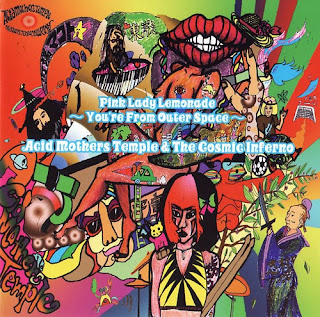 Utterly gorgeous. Unlike most Cosmic Inferno releases, this one is really, really mellow. This particular Acid Mothers guise was usually used mainly for the heavier or riffier compositions, but this one is really stripped down. In fact, most of the guitar work is acoustic. Listening to it is a lot like looking at the sugary artwork.

The album is bookended by two title tracks. The first is a lengthy acoustic one that I originally thought "Wow, this is pretty repetetive. I hope it doesn't get worn out", but the time passed amazingly quickly. It has a lot of subtle changes, and you'll hardly believe that 25 minutes has passed. The second title track is the familiar side of Pink Lady Lemonade that has been performed countless times by the band before. Personally, I prefer the Myth of the Love Electrique version since the vocal repetition of the track title grates on me a bit, but I don't think anything could ruin that track for me. It's so beautifully recognised.

As for the other two tracks found between the two title pieces, there's not much difference. The first one is very similar to the rest of the album, but adopts a bit more rhythmic sections, as well as a bit of surf rock influence. Finally, 'Take Me To The Universe' is the only track on the album to feature male vocals (courtesy of drummer and album cover artist, Pikachu) and reminds me a lot of Pink Floyd for some reason. It's very "plain" for Acid Mothers Temple, and probably my least favourite on the album, but it's still fantastic. Bearing in mind "plain" for AMT is still a lot more out there than most music.
Posted by Unknown at 1:24:00 PM