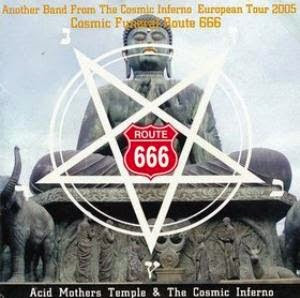 You might find all this a bit odd when you consider that Acid Mothers Temple & the Melting Paraiso U.F.O. itself had a regularly shifting lineup, and that some musicians here are common to both bands. As a cosmic traveler from another generation once said, "If you get confused, listen to the music play." The guitar on the two long (long) tracks is immediately identifiable as Makoto in heavy (heavy) riff mode. "Trigger In Trigger Out" opens with a short wisp of drone and then launches into a primordial blooze-rock riff that's only a couple parsecs in AMT space-time from ZZ Top's "Tush". From this simple guitar stomp Makoto goes positively apeshit, exploring every harmonic corner suggested by the chords with a torrent of acid-drenched and fiercely wha-wha'd notes. While Makoto solos his way into the setting sun, returning to the riff every five minutes or so as if to refuel, bass and drums hammer the hook home and crude analog synths pan rapidly between the speakers. Occasional voices howl from somewhere in the distance, offering some approximation of what it must have sounded like when Jefferson Airplane played a free concert in Golden Gate Park...from four blocks away.

"Trigger In Trigger Out" pushes past 20 minutes, which is slightly insane when you consider the energy level sustained throughout, but "They're Coming from the Cosmic Inferno" is the real straightjacket material. Forty-four minutes this one goes on for, and again nearly all space is filled with balls-out soloing. The riff is less a focus here. As the band locks into an unyielding metronomic krautrock groove, Makoto takes a free form and less blues-based approach, letting his leads go where they want to go.

The biggest problem with the record is the sound quality. The band is obviously playing live in studio and Makoto is credited as the engineer, so that could be part of the problem right there. In a sense the tinny and muddy nature of the production seems natural to the music, suggesting a connection to, say, the early 70s Zappa bootlegs that probably take up an entire wall of Makoto's apartment. But the guitar heaviness that seems so crucial isn't what it could be, and the other instruments get lost in the mix. The problem is alleviated somewhat when you listen at extreme volume (everything sounds better loud, but this record makes no sense otherwise). Still, if you can stomach the epic length and don't feel a headache coming on, there's something special happening. Though the snarling music projects a certain ugliness and undeniable aggression, the band's ultimate m.o. is transformative ecstasy achieved through profound disorientation. If the Cosmic Inferno catches you in the right mood, they just might get you there.