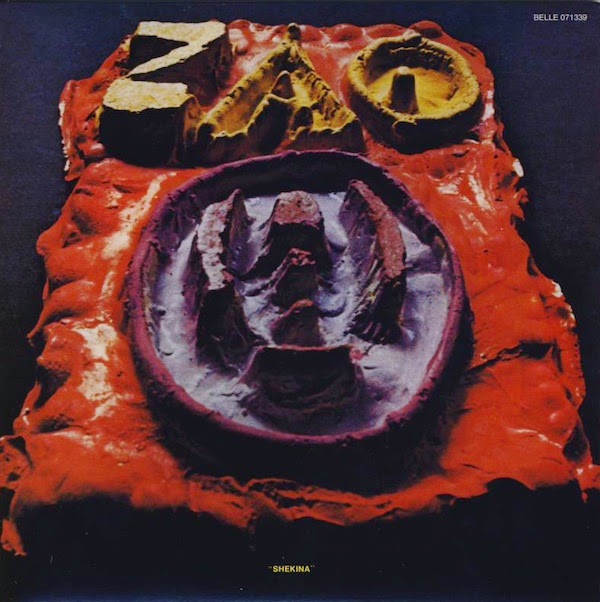 
I guess I shouldn't be so shocked at how good this album is, I mean Seffer and Cahen were a big part of MAGMA's early sound, and the first two ZAO records blew me away. I really am starting to adore this band. ZAO had to replace Joel Dugrenot on bass as he left to join CLEARLIGHT. So the deep vocal melodies he provided on "Osiris" would be missing on this one, leaving Seffer's higher pitched vocal melodies as the only vocals on this album. And really those vocals are the only link to the Zeuhl sound that is left. Not content to just repeat themselves there are some chamber-rock passages, as well as some dark, atmospheric soundscapes to go along with the Jazz melodies that are at times Zeuhl flavoured. For this record only they added a female string quartet named THE QUARTUOR MARGAND. This made ZAO an eight piece band and gave them more options when it came to the sound they wanted to create. The pictures in the liner notes are a real treat. There is a picture of all eight taken outside with most of them wearing coats. There is another picture of the four ladies all smiling happily, and then one more of them all 8 playing their instruments. When Seffer left the band after the "Kawana" album to do his solo stuff, he did so with the help of the QUATUOR MARGAND on his first album called "Ghilgoul". By the way this album's title is in reference to the place where God's presence resides. I think it resides in this music as well.

"Joyl" hits the ground running with an uptempo melody of sax, drums and keys. It calms down quickly though with sax being the most prominant instrument. The percussion is a nice touch, and the strings make a couple of appearances. This all sounds so good ! "Yen.Lang" features the whisper of the clarinet to open. Very atmospheric as vocal sounds, keys, cymbals, bass and clarinet slowly come and go with no real melody. There is an Eastern feel to this hence the song title. This is so different from anything ZAO has done before. It's far removed from either Jazz or Zeuhl. Violin starts to rise slowly out of this soundscape 5 minutes in getting louder and louder. Drums and clarinet are added. This sounds so amazing ! It's dark and the clarinet is relentless. A real chamber rock sound.

"Zohar" is where Jean-My Truong reveals that he is one of the best drummers on the planet. The bass throbs and the sax blasts away, but it's the awe inspired drumming that is the focus. The string quartet takes over completely 2 1/2 minutes in. I'm reminded of UNIVERS ZERO 3 1/2 minutes in as it sounds quite tense. The quartet stops 5 minutes in as we get a change in climate. This time it's percussion with spacey keys. Nice. It ends with a fantastic jazzy melody that has to be heard to be believed. The sax 9 1/2 minutes in is a highlight. "Metatron" opens with vocal melodies before the song takes off with sax and keys leading the way. The bass is prominant before 2 minutes and the drums are out of control. Vocal melodies are back with bass,drums and keys.This is unreal 3 minutes in. At this point i'm sitting here shaking my head and laughing. Seffer is blasting off sax solo after sax solo. Vocal melodies dominate 7 1/2 minutes in as it gets very Zeuhl-like. "Zita" is a slow moving track with vocal melodies, strings, keys and clarinet all taking part. Well done. "Bakus" opens sounding like a GENTLE GIANT song until the vocal melodies arrive. Uptempo with some more crazy drumming. Sax and percussion after 3 minutes.