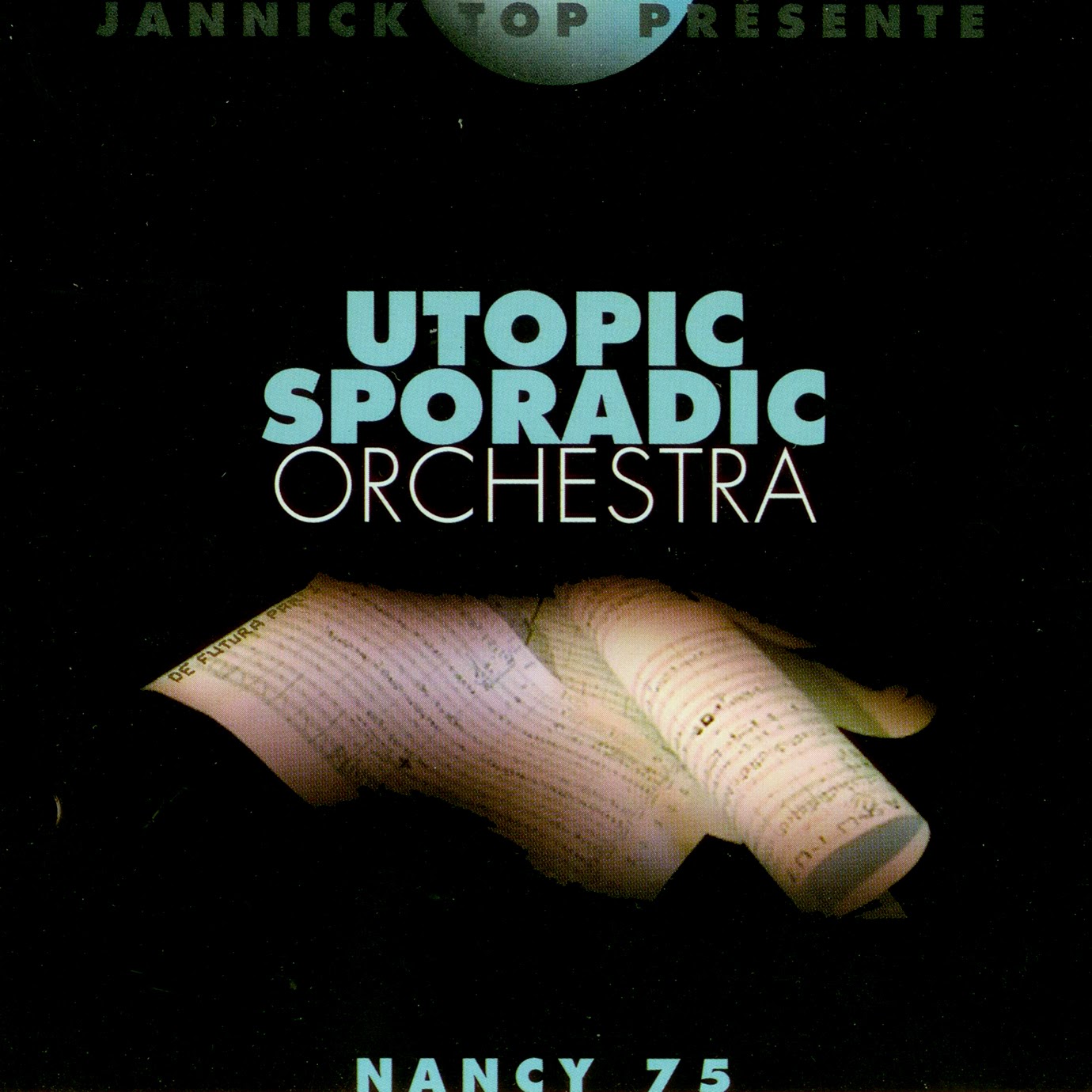 UTOPIC SPORADIC ORCHESTRA was really a one-off project led by MAGMA bassist Jannick Top. He invited many guests to play with him in this popular 3 day festival in France at "Nancy Jazz Pulsations" in 1975. This actual album consists of the song "De Futura" done twice. The first version was an over 23 1/2 minute rehearsal done the day before with the full 18 member lineup, while the second over 26 minute version was done the next day in front of thousands of people with that same 18 member lineup. This has been called "Big Band" Zeuhl in some quarters because of the sheer size of this band. Included are Christian and Stella Vander along with Didier Lockwood and many more. Two drummers, a percussionist, three keyboardisits, three violinists, two guitarists, a synth player, two bass players, three vocalists and cello. I wish the liner notes were in English but they're not so I did some searching for info about this concert and it was difficult to find much. Fortunately I found a review from this reviewer from Melody Maker who is English and who reviewed the whole festival. He had a French guide with him who told him UTOPIC SPORADIC ORCHESTRA were Free Jazz Rock but he disagreed as he notes "It wasn't, in fact, because most of the music of UTOPIC SPORADIC seemed to me to be highly organised, especially the second piece, whose flaws were dramatically highlighted by a re-run staged for the benefit of the excitable lads from FRENCH TV who seemed to swarm all over the damned place.This led the crowd going bananas and a THIRD replay. The music was identical each time-lots of synth howl and phase- shifting effects, very clever use of just three violins, cello and voices, and a bass guitarist, ex- MAGMA man Jannick Top, who was very raunchy. His partner, percussionist Christian Vander, was also outstanding...".

Included on this album are three bonus tracks but two are also the same song but done at two different venues the same year in 1974 and with a much more scaled down lineup of Top, C.Vander, Bikialo (keys) and Almos (guitar). The song is called "KMX E XII Opus 3" and it's fantasic ! Love the electric piano, drumming and growly bass.The guitar is excellent too as Olmos who played in MAGMA for a while impresses. Actually Bikialo and Olmos played with MAGMA on that live BBC 1974 release with Top and Vander. The other bonus track is called "La Musique Des Spheres / Part 2" performed in Paris in 1976.This is a trio of Top,Vander and Grailler (keys). Again Grailler was also part of that BBC 1974 live record. Another killer tune and one that is featured on Top's solo album "Soleil D'Ork".

I love this stuff and it's certainly not for the faint of heart as it can get so intense and abrasive. The Melody Maker guy noted that the crowd was stomping and cheering for the heavily amplified UTOPIC SPORADIC something he wasn't accustomed to hearing back then when going to British concerts. I love it ! A must for MAGMA fans if only because of it's historical merit, but I say because of the music. Crank it up !
Posted by Unknown at 8:48:00 PM