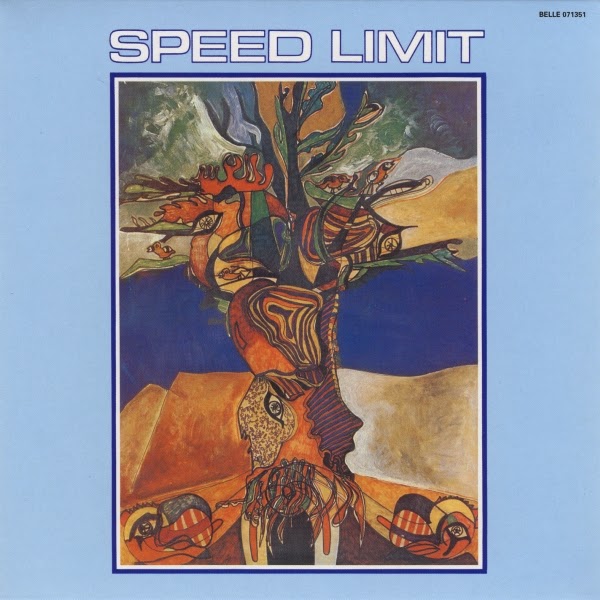 If the first Speed Limit album can be referred to as 'fairly rare' (it can be and I just did!), then the second album. also just called 'Speed Limit', but released this time by RCA in 1976, is truly rare. I had never actually seen it until this reissue. Once again led by drummer George Jinda, the personnel shifts a bit on this one and is even more impressive than the first album: Jean-luc Bucchi-electric piano, Yochk'o Seffer-saxes, Michele Ripoche-violin and Jannick Top-bass. This one is a really powerful album that I'm now exceedingly glad I never DID hear before, because if I had, I would've paid way too much to acquire an lp of this bad boy. It smokes pretty much from start to finish and is really a unknown classic of French Zeuhl/fusion. In addition to its own merits, it also includes an early version (using the same basic tracks, but not sharing all of them) of Soleil D'Ork from Udu Wudu by Magma, here entitled African Dance No. 3. So, Magma competists must have this as well. In any event, this is highly recommended.

SL's second album came roughly a year later than the debut, by which time the band found a major label (RCA) and changed bassist, enrolling Magma alumni Janik Top, but lost their guitarist as well (not replaced). With a stunning artwork from Sheffer himself, the group is more ambitious, even using a string section on and some intriguing vocals.

The opening track Time's Tune (a 15 minutes 4-part epic) has a real superb crescendoing start where Sheffer's winds and Bucchi's electric piano plunge into a torrid fusion of molten rock, disaggregating jazz, wild female howlings for its opening movement Breese. The band gets even hotter and quicker with run around The Block, where Coltrane's more transcendental (past 65) music is obviously the influence. The third movement heads back to the Breese mainly through the aerial vocalizing (they seem female, but none other than the core male musicians are credited with vocals), while the track goes out on a Bucchi (he wrote the whole track) piano piece. As for the JT-penned African Dance, the music is more of the Saharan kind than tropical Black Africa, and honestly I'd prefer hearing the real stuff than having SL wasting 4 minutes of precious vinyl time.

The flipside is occupied by an ambitious 20 minutes Sheffer-penned Pastoral Idyl, separated into 5 movements and using a string section, which happens to introduce the track. While the use of the string quintet is in itself adventurous, I find that Sheffer put the strings at use that well. When they intervene, they seem to weigh tons, drag their feet screechingly and often border the dissonant. The second movement Lemon Tree is a fast piano-driven improve where Sheffer and Bucchi clash forces and end up with a strong pressed lemon juice. As for the vocal section it is a weird almost opera voice. The track goes on a bit bizarrely, the whole thing remaining rather dry, borrowed and (dare I say it?) academic.

While their second album is somewhat superior to the debut, both are extremely valid jazz-rock, but not bringing much new (even counting the Pastoral Idyl) by the time of their releases. BTW, I hear the Belle label incremented the tracks with the movements rather than the tracks on their Cd mini-Lp reissue, so don't be surprised to find 10 increments where even the special Japanese insert announces only the three original ones. Despite such a strange screw-up, SL 2 is a more an accomplished album, so if interested, start with this second album.
Posted by Unknown at 6:40:00 PM