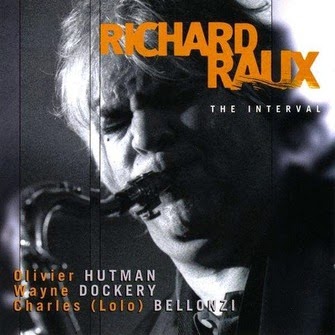 If you check the French « Dictionnaire du Jazz » you won’t even find the name of Richard Raux.  A most deplorable – not to say scandalous - oversight considering this guy has been blowing his horn for over forty years, with everybody from Magma and Memphis Slim to Marion Brown, from Magma to Sonny Murray.  OK, you’ve got the message: Richard Raux is no smooth jazz blower, no Kenny G disciple, no cold wave electro jazz whatever you may call it. Richard Raux is not one of the guys who occasionally plays jazz but makes his bread somewhere else. He breathes jazz or, perhaps even more, he breathes blues.  It is probably due to some spacio-temporal accident that he was born in France, he should have been born in the Mid-West, in St Louis perhaps, or in Chicago, or Texas … in any of those places that have become famous for producing Tough Tenors.

There is something of Hal Singer in Richard Raux’s style – very understandable since they played together quite often when Hal was residing in France.   Just listen to « Bo Blues » and « Blues for Bags ».
But he is not limited to the blues and is not afraid to walk in Coltrane’s giant steps as in « Train D.W..  He certainly knows his classics. Songs such as « Concept Ville » et « Sérail Seriel » show a direct influence of Monk.  Add to the mix « Witchi-Tai-To », a psych-jazz anthem by the late Jim Pepper (feat.  vocals by Wayne Dockery) and a few standards,  Richard Rodgers’ « This Nearly Was Mine, »  I Cover the Waterfront», and « The Song Is You ».

His partners in crime - Hutman, Dockery and Bellonzi - are not slouch either.

The result is an outstanding album.