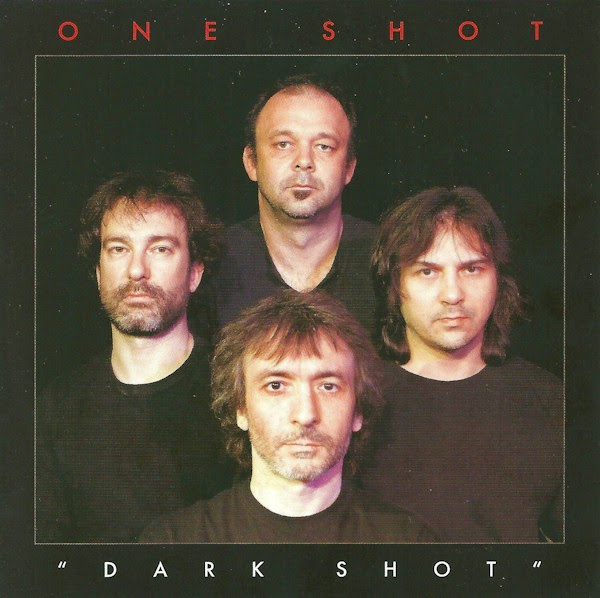 Shadowy and menacing like an impending tornado, One Shot is one hell of a heavy prog nightmare, reminding us that King Crimson's "Red" was pretty close to zeuhl and that a fantastic foursome can still be the finest sonic orgy ever. This is a sledge-hammer guitar, keyboard, bass and drum onslaught with no frills or ornaments and no ribbons and bows. Contrary to their day Magma gig, they waste no time with vocals either, preferring a simple menu of just plain, head down instrumental fury .We are miles away from symphonic prog , delving instead into the deep core of molten rock , bubbling miasma, sweltering shards of fiery sound and harsh flows of powerful bravado. Fueled by the ominous Philippe Bussonet bass panzer and seconded by some rivet-busting drums from Daniel Jeand'heur, lead guitarist James McGaw and keyman Emmanuel Borghi have carte blanche (or rather carte noire!) to roam majestically and at will. The whirlwind "Black P" wastes little time in setting the stage with some ferocious flings that wink and nod at certain a red monarch from long ago, while "Opus 12" collides head on with softer machines, a driving heavy jazz romp that is totally unrelenting. Immediately it becomes apparent that these men really can handle their instruments convincingly and that a unique spirit elevates this to grandiose heights. "Def Mk1" is at first slightly more unsettling, urging towards a paranoia-laden concoction where the electric piano rules supreme (what a solo!) , a nasty bass grimace kicks in shoving the mood ever forward, deeper and deeper into a sonic chasm, some hotwire guitar needling away at the crust and serious explosive high voltage drumming to keep the tension sizzling. Wow! "Blade" is the briefest piece, a cymbal jungle veering into a softer expanse that offers some well-deserved respite and introspection, a razor sharp display of groom and doom. Slap on the gel, make it foam and let the cutting edge slice away the bristle. Cool indeed! "Automate" is a slingshot salvo back into aural insanity, a robotic Wetton-esque bass furrow sweeping everything in its path, ringing e-piano resonance caressing the road signs, deliberately baleful and lumbering. Trashy drums keep it all on track while a twisted synthesizer sortie makes an effective appearance, insistent and ravenous. "Downwards" is a guitar fiasco that ignites from the get-go, a histrionic unleashing of tone and texture that reveals McGaw's inner sanctum, a universe fluid and raw, uniquely disturbing and yet deadly accurate. There are no Holdsworthian displays in his attitude, in fact it's actually closer to early John MacLaughlin's (another crazy Scot) or more conventional rock guitarists like Fripp or Reine Fiske of Landberk legend. "Nosh Partitas" is a whopping closer that rages, vents and fulminates with little decorum, the throbbing bass well installed and the One Shotters headed to the sulfuric finish line

A gigantic thank you to sinkadotentree whose drooling comments and input helped me in savoring this sonic hurricane. In closing, prog is like making love , sometimes we like sweet and sensual and then there are those edgier moments when it's so good hard and sweaty . A no contest masterpiece.
Posted by Unknown at 8:48:00 PM