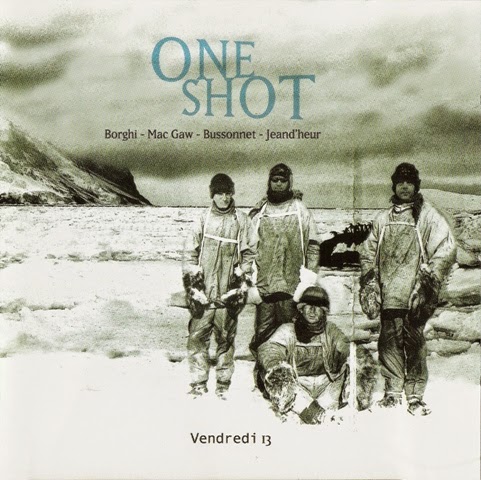 What a lineup ! Former MAGMA members Emmanuel Borghi (Fender Rhodes, synths), James Mac Gaw (guitar), Philippe Bussonnet (bass) and also Daniel Jeand'heur(drums) who also recently played on AMYGDALA's second album are ONE SHOT. This is a live album recorded on Friday the 13th, hence the title in French. This could be described as dark, heavy Jazz with a lot of Zeuhl references.

"I Had A Dream Part 1" is the shortest track at over 6 minutes in length. Drums and keys open as the guitar comes in quickly.The result is a catchy, heavy sound.The bass 2 1/2 minutes in is monstrous to say the least. "I Had A Dream Part 2" is the longest song at 14 minutes. Compared to part 1 this is more adventerous and proggy and I like it better. Lots of atmosphere to open as different sounds come and go. We get a melody 2 minutes in. I love the way the guitar plays over top. More excellent guitar before 5 minutes with very chunky bass lines. The drumming is amazing in this intense section. Huge bass after 10 minutes. When it settles down after 11 minutes the crowd cheers at the sheer intensity and brilliant instrumental work that they have just witnessed. The guitar grinds away slowly to end it. "Blue Bug" opens with some deep bass that continues slowly until we start to hear the drums 2 minutes in. It's building slowly, reaching it's peak around 4 minutes before calming back down. It's 7 minutes in before it gets poweful again but settles again quickly. Nice guitar work after 7 1/2 minutes though. The intensity is rising after 9 minutes. Great sound.

I can't recommend this high enough to the Zeuhl fans out there. In fact if your into heavy music or bass guitar, this is very much worth checking out. It couldn't be played any better i'll tell you that much.