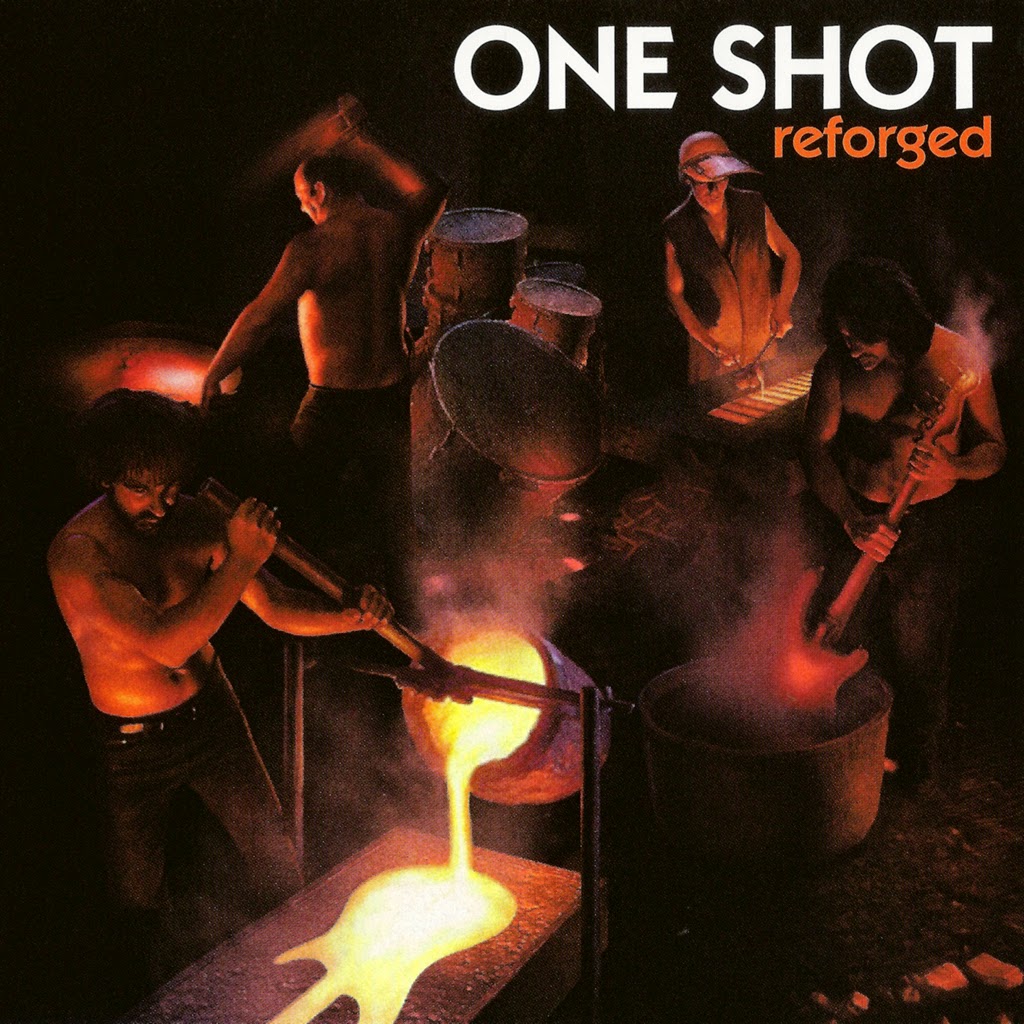 One Shot is one of those French Zeuhl band that benefits from a semi-legendary status, despite the band being only around for slightly more than a decade. The wild instrumental quartet (lead by American guitarist McGaw, keyboardist Borghi and bassist Bussonet) released their debut album in 99, and followed-up with two more albums throughout the next decade. As the title of the present disc might indicate, the present album is a re- melting of their debut album (the only available version nowadays), some ten years after its original version, because they thought that the recording process was somewhat perfectible, but it's not like we're about to get an over-produced and slickest album, quite the opposite..

OS's instrumental soundscape is a typical Zeuhlian product, one that owes still to the Kobaian band, but clearly shows its personality. You will instantly recognize the French paw, despite a certain propensity of McGaw at splashing his incendiary guitar solos at the forefront. Aside McGaw's guitar pyrotechnics, you can only be impressed at Bussonet's pulsing bass and Borghi's excellent Hammond and Rhodes exhibitions, while Jeandheur's drumming is aptly responding at his musical pals' adventures. Despite the renovation of the original recording, the album has kept a very immediate in-your-face almost-jammy rawness that characterizes One Shot, much of it, courtesy of McGaw's bleeding guitar. Generally the music flies around the speed of sound, but there is a fairly welcome rest in the 10-mins with Un Jour Dans l'Est, where Borghi's Rhodes reigns king above all, before Bussonet's Riff Fantom just sends the album into Neptune's orbit, especially with Jeandheur's awesome drumming performance. Added as a bonus on this remixed, remastered and repackaged Reforged version of the album, Fleuve is a cool bonus track (a real one), but definitely jazzier and "cleaner" in terms of sonics.

Clearly Soleil Zeuhl's captain Alain has again dropped a very timely bomb in the Zeuhl microcosm (he just stroke another major blow with the reissue of eider Stellaire's debut album), but it's not like the very-involved nature of One Shot's Zeuhl music will draw big sales. Nothing to revolutionize the Zeuhlian world, but along with early Eskaton or Stellaire, this is the kind of album that perpetuates the legend of the genre, but beware that this gem is un-carved.

Finally ONE SHOT has re-issued their debut. Originally the band released 500 copies which were all sold years ago. This one is under the Soleil Zeuhl label and it's been remixed and remastered. New cover art and a new title too as they call it "Reforged" instead of it being self titled. This was originally recorded in one day. I like this album a lot, it's not as dark or heavy as the two studio albums that follow but that's okay, I like how Jazzy it is, and at times it seems improvised. A lot looser feel here overall. For those who don't know this 4 piece band includes 3 members of MAGMA (Borghi, Bussonnet & MacGaw) along with a killer drummer named Daniel Jeand'heur.

"MDM" opens with some atmosphere then it kicks in before a minute. Everything stands out here, the bass, guitar, drums and keyboards. They're just ripping it up after 6 minutes. It ends like it began. "Monsieur G" features some prominant guitar early then the bass, keyboards and drums take the lead 2 1/2 minutes in. The guitar is back before 4 minutes. "33" opens with drums and chunky bass before the angular guitar arrives. A blistering display after 3 1/2 minutes. "One Shot" is led by bass and cymbals before the keys and drums join in before a minute. The guitar makes some noise before 3 1/2 minutes and later before 8 1/2 minutes to end it. "Le Main Du Diable" is the longest track at 11 1/2 minutes and a top three for me. It's uptempo to start then it settles with guitar as contrasts continue. It turns dark and experimental after 2 minutes. Nice. Check out the keys ! The guitar comes to the fore later then it turns uptempo again.

"Un Jour Dans L'Est" is another top three. Faint keys to open. Cymbals before 2 minutes. It's building. Bass joins in as it stays pretty laid back as keys lead. "Riff Fantom" is my favourite. This is classic ONE SHOT right here. Dark, heavy and very powerful like the albums to follow. Nice guitar work 5 minutes in. The drumming is fantastic later on. Incredible track. "Fleuve" is the bonus track which was recorded at the same time as these other songs. Guitar led and relaxed early on before the keyboards take the lead. Guitar is back later. I like it.

This was originally recorded February 22nd 1999 and the followup studio album ("Ewas Vader") wouldn't be released for about 7 years. An early look at this amazing band. A must for ONE SHOT fans and fans of Jazz / Rock / Fusion.
Posted by Unknown at 7:55:00 PM