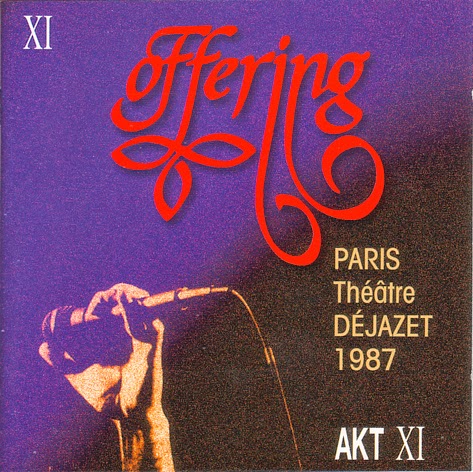 
I noticed as I was about to review this live double album from OFFERING that they have just released a new live album from a 2013 performance. It's probably about time really as this live album i'm reviewing was recorded way back in 1987 and at that point they had only released one studio album. Two studio albums would follow and in my opinion they got better as they went. If you don't know, OFFERING is a Christian Vander side project that is dedicated to his hero John Coltrane. The music is jazzy and led by piano and vocals for the most part, but this music is also fairly experimental at times so it's difficult to say that OFFERING is a more commercial sounding MAGMA in my opinion.

Because this is a live recording the music does seem more experimental than the studio albums with plenty of improvization. So for my tastes it's a little inconsistant with some passages over-staying their welcome. A few of these tracks would end up on the next two studio albums. Like many double albums I could edit this one down to one disc and be very impressed. Disc one starts off with "Lohengrin:Prelude" which is a disappointing start in my opinion with the classical sounding instrumental music going on for about 8 1/2 minutes, just not a fan. "Ole" sounds really good early on with some flute playing over top. Stella comes in and eventually her vocals will be the focus. There's a nice piano interlude. Good song. "Cosmos" is a short piece led by piano and female vocals. It's okay but I do tire of the vocals. "Afiieh" is much better and the audience seems to agree with their response when this one starts. Christian is outstanding on vocals here. It seems like everything is being held back and restrained throughout. I like it!

"Les Anges" is piano with Christian on vocals to start. Some female vocals are added later. Again like the previous tune this one is restrained although Stella breaks free of that late. "Les Cygnes" is one where Stella's vocals get a little theatrical at times. The song is okay but i'm not a big fan of it. "Solitude" as the title suggests is laid back early on until the vocals break out. Contrasts continue. An average track really. "La Nuit Du Chasseur" is less than 2 minutes of Stella on vocals with orchestral background sounds. It blends into another short song called "Les Vagues" where it continues in the same style but without vocals. "Lush Life" is one I just don't like with Guy on vocals with piano helping out. "Joia" certainly makes up for the last song as Christian simply kills with his vocals on this over 22 minute journey. Well done!

Disc two begins with the over 47 minute "Another Day" which is such a journey with the vocals and catchy sound dominating. "Anta" is filled with intricate sounds, especially percussion. "Chorus De Batterie Introduction A "You've Got To Have Freedom"" is a 14 1/2 minute drum solo basically as an intro to the next song "You've Got To Have Freedom" which clocks in at around 6 minutes. Not a fan of the drum solo for the most part but the following song is really good with the vocals and drumming standing out.
Posted by Unknown at 11:57:00 PM