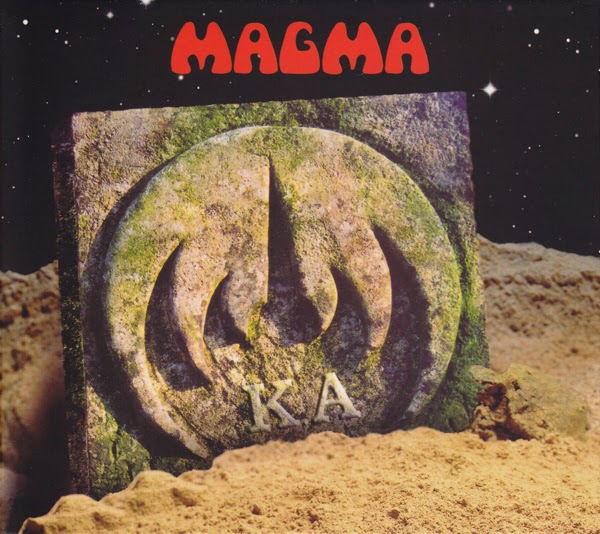 This is the Magma album that fans have waited almost 30 years to hear, and it's easily on a par with the best of their mid 70s work. Fragments of this work have been heard before on Inedits, and the closing 'Alleluia' chorus can be heard on the early version of Kohntarkosz on BBC Londres 1974, but this is the first time the whole work has been presented (or finished, for that matter). In the rather convoluted sequence of Magma's Kobaian epic, this piece would come after Mekanik Destruktiw Kommandoh and acts as a sort of prequel to Kohntarkosz. Most of the album is closer to the Carl Orff stylings of Wurdah Itah and Mekanik Kommandoh than to the more instrumentally based Kohntarkosz or 1001 Degrees Centigrade, with Vander's trademark vocal arrangements sounding lovelier than ever. The new band are also true to the Zeuhl spirit, especially guitarist James MacGaw, whose clean tone and economical but melodic guitar lines recall the work of Claude Olmos in the '73/'74 line up.

Parts 1 and 2 are light and melodic pieces featuring dazzling interplay between piano, guitar and vocals, all underpinned by Vander's metronomically precise drums and some nicely judged bass from Philippe Bussonet. Part 3 opens with a lengthy instrumental passage (sounds like a synth but it was probably intended for flute or sax) which demonstrates the jazzier side of Vander's muse - it's surely no accident that a photo of John Coltrane is visible in the background of the snapshots of the band. Part 3 then builds to the kind of climax familiar from other Magma epics, culminating in what sounds like a distant cousin of the Hallelujah chorus.

This is also the best sounding of Magma's studio albums - modern recording techniques mean that every element of the complex arrangements is crystal clear, but thankfully the dodgy production values which spoiled albums like Merci have been abandoned in favour of a more natural sound.