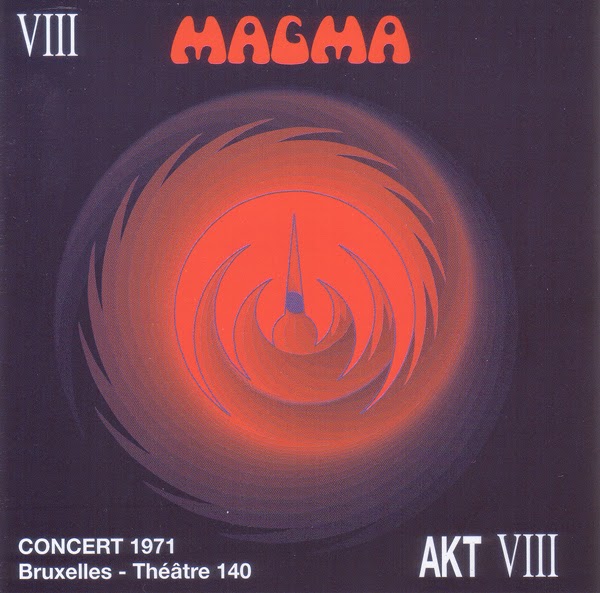 
this is an easy album to review. If you are reading this you are probably familiar with the music and language of Magma. If not.. get acclainted with a copy of Mekanik Destruktiw Kommandoh. This album is an 'official' bootleg recorded in Brussels at Theater 140 the 12th of November 1971. The date is significant for a couple of reasons. First off this was the first public performance of Mekanik Kommandoh which of course became the basis for their landmark (and essential album of prog) Mekanik Destruktiw Kommandoh. Secondly as a huge fan of the fusionairy debut album Kobaia, I wanted to hear live versions of songs from that album. On both counts the album left me completely satisfied.

Being a offficial 'bootleg' I feel a word about the quality of the album should be said. It is a released bootleg so don't expect 100% perfect sound quality. This album is for probably for Magma fans only. That said the quality was never a hinderance to my enjoyment of the album. Now on to the album itself

The album contains three songs off of Kobaia. Stoah, Kobaia, and Aina. The whole of the 1001 degrees Centigrade album, and two works in the formative phases at that point. The aforementioned Mekanik Kommandoh, and Sowiloi which would turn up later on the outakes album Inedits. The one thing that really stood out between this album and the previous versions of songs I noticed, was the Rhodes Piano and it's central place in the live Magma sound. Many accoustic parts in Kobaia were played instead by the Rhodes. That took a bit of getting use to for me since part of my love of Kobaia was the great accoustic piano playing.

The highlights for me...

Stoah. Those opening vocals are impressive. Even more so in the live environment. The vocals are so massive on this album. Must have been an incredible live show.

Iss Lansei Doia. My least favorite song off of 1001 is transformed here into a favorite by a simple shift in instruments. The menacing intro riff instead of being played on the bass is instead played on the accoustic piano. Adds a whole new darker vibe to it.