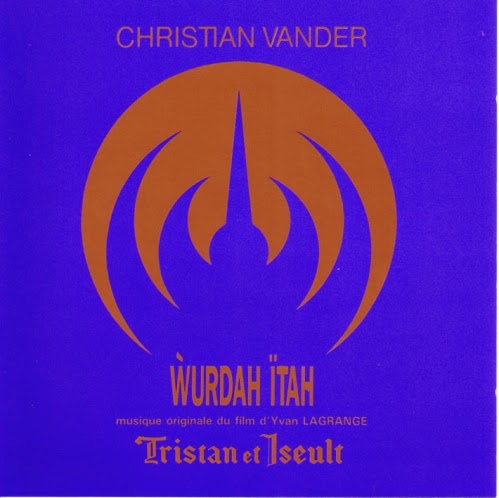 Officially a Christian Vander solo album, Wurdah Itah is the work of the core members of Magma's classic 1973 - 1976 line up. The album was recorded in just 4 days as the soundtrack to a film version of Tristan Et Yseult, which by all accounts was less than a cinematic masterpiece, but the soundtrack more than compensates for that.

This is a very stripped down version of Magma: no choir, no horn section, not even a guitarist or a second keyboard player. Chris Cutler called it the clearest and most concentrated of Vander's work, and this album is a good demonstration of the melodic side of Magma. Although it is broken down into 12 short pieces, the album is really 2 lengthy sequences - tracks 1 - 6 (side 1 of the vinyl original) and tracks 7 - 12 (side 2). Live, it is performed as a continuous piece in the same way as Magma's other epics. The opening bars are the same as Theusz Hamtaahk, while later on in the album themes that would be more fully developed on MDK can be heard. These leitmotivs give the trilogy a sense of cohesion which which really falls into place when the pieces are heard in order. The wonderful Carl Orff style vocals familiar from other Magma albums are the dominant sound on this album, with Klaus Blasquiz heard to particularly good effect. Jannick Top turns in a superbly judged performance; subtle and understated without a single extraneous note. Vander likewise plays the drums with a delicate precision that the larger Magma line ups sometimes drowned out, while his piano playing is solid and assured and shows the influence of McCoy Tyner from John Coltrane's classic quartet.

Wurdah Itah is an essential part of Magma's output from their greatest era, and is a vital addition to any collection which contains MDK or Kontarkohsz. Whilst it may be atypical Magma, it could well be Christian Vander's masterpiece.