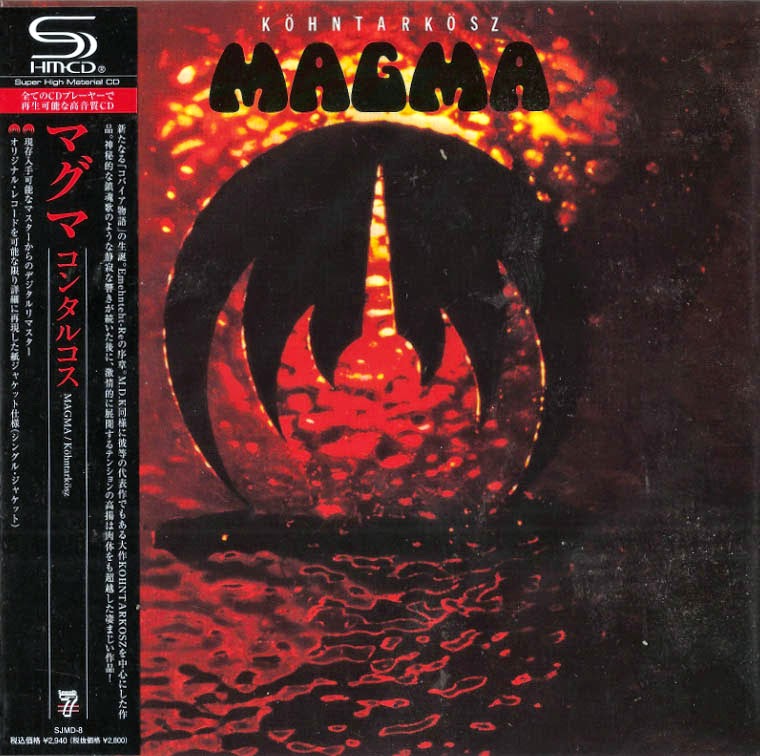 If you are not into Zehul, this is not the best starting point. In fact, this album is a mature opera that can't probably be appreciated without having been in touch with their previous recordings.

Unfortunately, the 30 minutes epic was not suitable for a vinyl edition and this is the reason why Kohntarkosz is split into two parts. Some lyrics are in "Kobaian" so it's better to inform Magma's newbies about an alien language invented by Christian Vander some albums before. Don't waste your time trying to understand what the lyrics say. From a musical perspective, there's a touch of cold jazz, some Canterbury (Soft Machine, Hugh Hopper as reference), but also classical accents, apparently without a melodic line. It's only after several listens that a structure seems to appear. A hint consists in following the drums as main instrument because it's where regularities and structures are more evident. The sound and the athmosphere are dark and dramatic. Probably suitable for a soundtrack, but keep an ear to bass and drums. The roots of this piece are with no doubts progressive. Only Magma's vision of music is too wide to be confined into a single genre. The piano ending of part 1 is the easiest. Let's wait for Part 2 now.

"Ork Alarm" is a Kobaian song made of cellos and vocals. Not a relaxing song, of course. It's more bizarre than dark. I think this can be enjoyed also by a newbie. It reminds me to Quintorigo that I recently suggested for inclusion on PA.

Kohntarkosz Part 2 starts with the piano. Of course this is restart from where Part 1 ended. After the first two tracks this is quite a surprise: there's a melody and the agitation of the A side seems disappeared. But only for a couple of minutes. The music turns back into an obscure territory. The piano keeps the tempo with dissonant chords while the variations are given by drums first and bass later. It's like exploring a jungle on an extrasolar planet, or a cave never visited before. This music is evocative, specially when Stella Vander starts with her vocalisms. Christian follows and the music becomes parossistic and chaotic. As in the first part, is the drums that give regularity to the track, but there is an impressive work performed by the bass in the background. For those who appreciate the early Vangelis, this part is not so distant from "Nucleogenesis". I think it can be defined as "cold jazz" when the clavinet (is it a clavinet? I don't know) takes the leadership. This is the part on which Magma demonstrate all their musical skill. From here it's a crescendo of different situations leaded by vocalisms and piano chords while bass and drums provide the base. Suddenly it calms down and the last two minutes bring the piece to its conclusion

"Coltrane Sündïa" is a nice and relaxing track based on piano and keyboards. Again this reminds me of some early Vangelis works.

To summarize, if you are already into Magma, this is essential.