Khan Jamal
1974
Give The Vibes Some 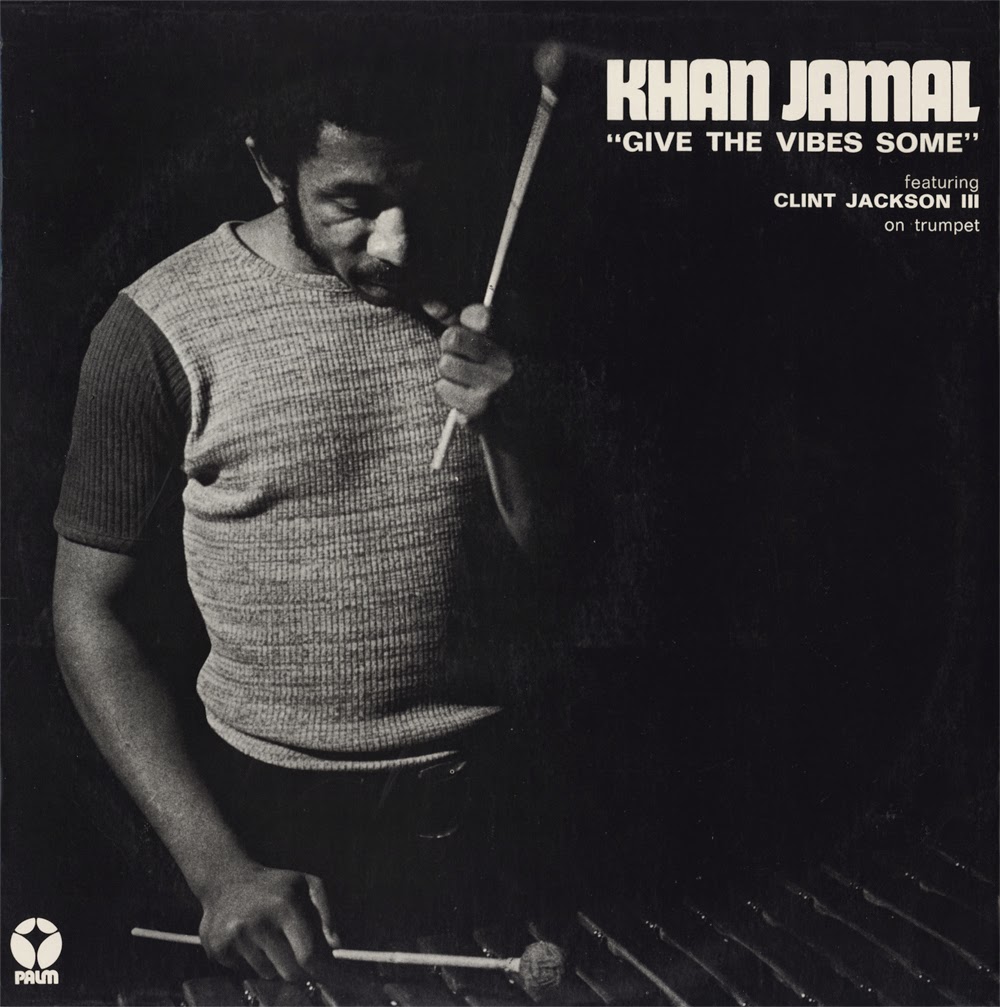 Splendid last release of Jef Gilson on his own mythic label, Palm. US vibraphone genius Khan Jamal gives the evidence of his talent, with four long tracks full of spirituality.
Vibraphonist Khan Jamal solo (B2) and in duets with Hassan Rashid (pseudonym of Christian Vander) on drums (A1 + B1) and Clint Jackson III on trumpet (A2) with some tendencies in free jazz or experimental regions. The pieces with "Hassan Rashid" are on a more powerful level and the drumming is in a similar style than parts of his solos in the same year with "Magma". Khan Jamal's duet with Clint Jackson III and his solo performance on marimba has a more intimate character.
Khan Jamal is one of the unsung heroes of the vibraphone, developing his own unique personality on the instrument apart from the blues drenched soul of Milt Jackson and the hard-bop pyrotechnics of Bubby Hutcherson. This obscure album was released on the French Palm label, and feature Jamal in some really interesting duet and solo settings. Starting off with “Pure Energy" with track lives up to its name as Jamal and drummer Hassan Rashid build a rippling and rolling improvisation that develops into a very exciting dialogue. Ringing vibes and rolling drums develop an unstoppable momentum, and the percussion duet is fascinating to hear. “Clint" swaps things up as Jamal switches to marimba and Clint Jackson III sits in on trumpet. The music that produce is very free and open, probing the minimalist setting in a quiet fashion. “35,007 Feet Up" is the centerpiece of the LP and just an awesome performance with Jamal back on vibes and Rashied returning to the drum seat. After vibes open with an Asian sounding motif, shimmering vibes and then strong supple drumming move together for a collaborative free improvisation. The music is exciting and courageous, fast and strong and loaded with nimble and dexterous playing. Spinning out into an awesome epic, the music is hypnotic and memorable. “Give The Vibes Some" ends the album with a very impressive solo vibraphone recital. Opening with a shimmering metallic feel evoking sunrise Jamal develops an optimistic and very pleasing sound. It is the sound of crystalline haunting beauty and mystery and is the perfect summation for this excellent album that deserves much wider recognition.