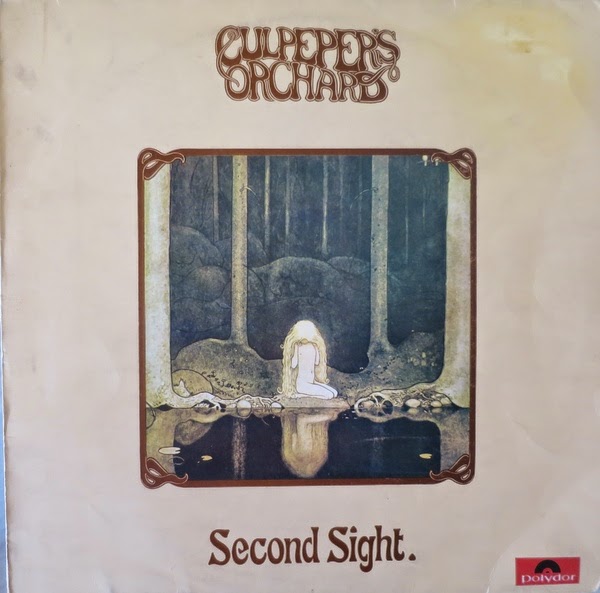 Second Sight is the second studio album from Danish band Culpeper´s Orchard. The album was released in 1972. Frontman and guitarist Cy Nicklin ( who is english and not Danish by the way) started Culpeper´s Orchard after leaving another experimental rock/ progressive rock band which he started in 1968 called Day of Phoenix. Before his days in Day of Phoenix he enjoyed moderate success with the Danish folk trio Cy, Maia and Robert which also hosted another one of the most prolific characters on the experimental Danish rock scene of the late sixties and early seventies namely Robert Lelievre ( who was French by the way). Robert was the mainman behind one of the most rare and expensive Danish releases ever: The original LP with Pan. I´ve seen that album a couple of times in second hand stores and it cost from 300£ to 350£. Robert sadly took his own life on the 26th of August 1973.

Well that aside Cy Nicklin and his companions in Culpeper´s Orchard released their debut album in 1971. It´s a pretty good album which reminds me a bit about the early Jethro Tull albums. It´s a mildly progressive album and it is clear from the start when you listen to that album that Culpeper´s Orchard isn´t the most innovative band in the world. It´s still a good rock album though.

The music on Second Sight hasn´t gotten anymore progressive than it was on the debut, but the quality is still high. The music is generally more mellow and there are lots of beautiful acoustic guitar playing, great singing and memorable melody lines. Like on the debut there is a considerable amount of blues rock influences but this time the folk tendencies are more obvious than before. The last song Satisfied Mind is even in country mode. The only slightly progressive song on Second Sight is Mind Pollusion / Weather Report that starts with a beautiful acoustic section while the second part of the song showcases the most hard blues rocking moments on the album. Great track that one. The rest of the songs are also good and because of the many folky acoustic moments I´m reminded a bit of Led Zeppelin III ( and maybe a bit of Wishbone Ash).

I enjoy this generally mellow and beautiful album but it´s not the most challenging album in this world. If you like bluesy and folksy rock music with a slight progressive touch this might be an enjoyable album for you.
Posted by Unknown at 2:45:00 PM