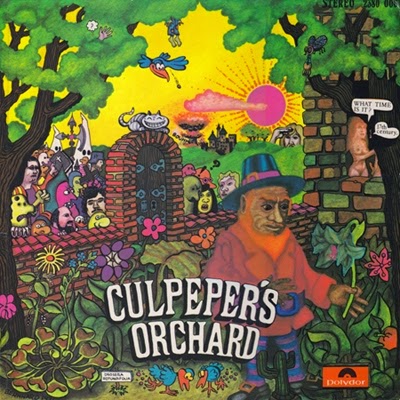 A Danish rock band fronted by Englishman Cy Nicklin, this foursome produced three albums in the early 70's, before disbanding but recorded another one under the shorter name CULPEPER in 77, but it does not sound much like their former albums. The debut was particularly successful both commercially and artistically, a very entertaining and professional effort, somewhere stuck between ZEPPELIN, TULL and BEATLES. The second album was more folky but saw two members leave after its release, leaving Nicklin alone at the helm and recording the third album, sometimes bordering country music.

This is arguably one of the top 10 70s European (non-British) albums in any sub-genre of rock music. I am personally amazed by al its virtues (solid songwriting, energy and power without ever being too heavy or pompous, excellent vocals in English) and it gives me a very euphoric feel whenever I listen to it (especially flowing, fresh tracks like the excellent "Teaparty for an Orchard"), despite the fact that it also contains a few great somber tracks like "Gideon's Trap". It culminates with the high-energy, amazingly climaxing "Mountain Music Part 2". The album is vaguely "prog", more reminiscent of 1969-71 Vertigo British albums. Elements of Procol Harum, Jethro Tull or even CSNY are present, but the sound is original and very very pleasant.