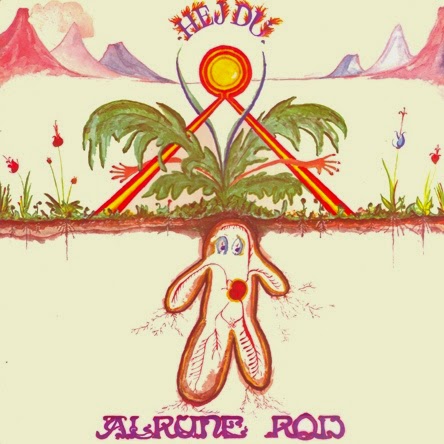 If AR’s debut was a dark and un-commercial album, wait ‘til you get a load of Hej Du with its three tracks only (we are in ‘70, well before CTTE or other landmarks), and multi-movement pieces. Sporting a naïve childlike artwork, fans usually regard this album as the group’s definitive statement, and I must say that it does make quite an impression on me, still more than 10 years after discovering it. Actually the group will experience their first line-up change during the recording of this album, with original drummer From leaving the stool to Karsten Host.

Starting with the distorted guitars of Du Taler Sumthinalongthisline (You Talk And Say), the album gives a shot in the anthill of your certainties, but the track is actually fairly weak as the over-powering vocals are not exactly well thought out. The following 15-min+ title track is quite an improvement, as it is reminiscent of the dynamics of the closer Hjem of the debut album. Indeed, the organ and guitar are clashing wildly while Host’s drumming is at times breathtaking.

The sidelong 8-movement almost-22min suite Perlesoen is clearly the album’s centerpiece (even if it stands as its last track ;o), with its interesting mixture of dark organ-based progressive (ala Uriah Heep), psychedelic music (early Pink Floyd), and space rock (early Hawkwind) and bits of soul music (reworked ala Vanilla Fudge), with loads of riffing guitars and wild drumming. Even having some flute parts in one movement, this epic is truly progressive with each chapter developing its own mood, but adding to the whole structure. One of the assets of this track is that a second drummer Klaus From helps out, giving more depth to it. Just past the halfway mark, as the track stops for umpteenth time, the bass picks up with the searing guitar, soon joined by the drums and organs to build a lengthy crescendo, then suddenly, bass and guitar break away some more, before eventually dying out. As soon as gone, an organ line is to be heard lazily followed by another, then almost whispering vocals (at first anyway) with Appice-like drums, the whole thing ending in chaos!

Although marginally better than their eponymous debut album, Hej Du is one of Denmark’s most definitive albums in its genre (if you except the vocally ambitious but ultimately poor opening track), and only topped progressively (but in a very different genre) by Secret Oyster’s outstanding jazz-rock of Sea Son. Highly recommended piece of somber hippie rock especially to most of those symphonic progheads claiming psych rock is not part of “prog”.
Posted by Unknown at 8:38:00 AM